This year's Canadian Ski Marathon encourages social protocols for participants with virtual offering, according to Bourrie, who coaches the Biathlon Bears
Feb 11, 2021 2:59 PM By: Derek Howard 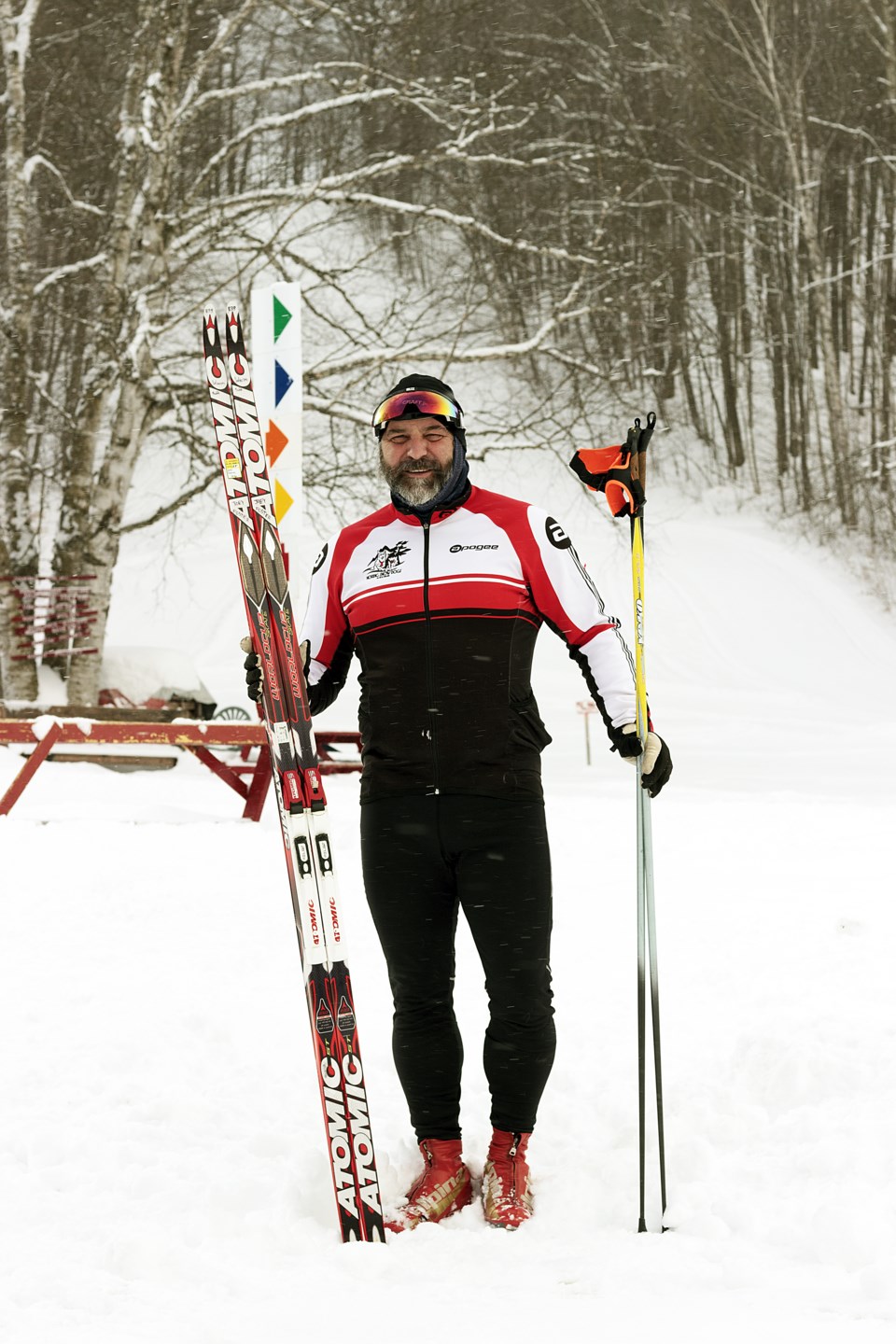 Tim Bourrie, coach of the Biathlon Bears at the Mountainview Ski Club, looks forward to the day that his students can once more participate in club activities in a safe post-lockdown climate.Derek Howard photo

A confluence is defined as a series of loosely-related events coming together for a brilliant moment in time.

That could mean a small-town ski area, which hosts world-class athletes, a beautiful climate, which invites heavy snowfalls within the region, the destructive fire of an historic building and how these all brought a local swimmer into the supporting role for future competitors.

“I should’ve been a wrestler or a rugby player or something like that; I’m built like a square brick,” joked Tim Bourrie, 52, the coach for the Biathlon Bears at the Midland Ski Club.

Born and raised in Midland, Bourrie’s experience with local sports began during an historic moment in 1976.

“So, growing up here, like everybody else I played hockey,” Bourrie related. “But then the (Midland Gardens) arena burned down; I believe I was about eight years old. There was no hockey for a year. My parents had to put me in something because I was pretty active, and I started swimming. I never went back to hockey, and I kept swimming, and I did that right through university.”

Bourrie’s career at Weber Tool allowed him to enjoy recreational cycling and skiing in his thirties, taking up Nordic skiing with greater interest upon meeting local teacher and ski team coach Jim McMillan.

“He recruited me to help out," he said. "I didn’t know much about the sport, but through time and taking courses, I got to coaching Nordic skiing.

“Then there was an advertisement in Duntroon about a biathlon. We both said it was hard getting adolescent males into Nordic skiing — it’s an individual sport, and we’re a hockey town; we had good success getting lots of young women into skiing but the males weren’t showing up — so we thought biathlon would be a great way to get boys into it. Because what boy doesn’t like to shoot an air rifle?”

Biathlon started out thousands of years ago as a means of hunting in snowy climates, progressing to a Norwegian military training exercise to hone rifle shooting while on skis, before becoming a civilian hobby and then a sporting event in the early 20th Century.

The sport is a hybrid of Nordic cross-country skiing and marksmanship, which is timed for distance and scored on speed and accuracy.

The Midland Ski Club purchased biathlon equipment roughly eight years ago, and since then the Midland Biathlon Bears program has evolved into its modern setting of both girls and boys aged between 10 to 14 years old.

“We’ve never advertised the biathlon,” admitted Bourrie. “I bet if I put it in the paper and advertised it hard, I could probably get 20 to 30 kids… but I just don’t have the equipment.

“We’ve always been cautious about getting too many kids in. Also, when you’re coaching marksmanship, it’s always hands-on and safety’s always a concern so you can only have so many kids in the range at any given time.”

Bourrie also stated that for all the fun the Bears have, when the air rifles come out “it’s serious time."

The Biathlon Bears is a nationwide, comprehensive program that teaches the skills required for the sport, according to Biathlon Canada.

While the true sport uses a highly-modified, .22-calibre rifle carried by professional athletes around a 20-kilometre course, the Midland Bears use a .77-calibre pellet air gun shooting at a 10-metre range as opposed to the standard 50 metres for the full sport. Accordingly, the course distance is also lowered for age purposes.

COVID-19 has impacted the current winter season for the Biathlon Bears, ceasing all activity within the club.

“Biathlon never got off the ground this year,” Bourrie shared, “because it happens with our Learn To Ski program in January, and at that time in Ontario it was a total shutdown. We were hoping to reopen it in February, but because it was still shutdown, we haven’t run any Junior programs whatsoever.”

However, Bourrie was happy to relate that many of his skiers were participating in the 55th Canadian Ski Marathon's virtual event taking place from February 6 to March 7.

With a pandemic-focused variation of the long-running event, participants can register online for the Tourer (15-kilometre), Half-marathon (45-kilometre over one day), or the Coureur des Bois (two 50-kilometre runs over two days) within the 29-day span. The focus is on promoting healthy activity within a socially-distanced and safe environment at the athlete’s own pace and comfort area.

Bourrie praised the hills and trails of the Midland Ski Club’s area.

"It’s right in town; it’s a jewel," he explained. "It’s like Little Lake Park, but on a grander scale… and people don’t know about it.”

There was caution to his words though.

“There’s five landowners that generously donate their property to us to ski across… and what we’re finding is once properties sell, we’re always crossing our fingers hoping that the new landowners enjoy Nordic skiing. Because if any one of these places don’t want us grooming across the trail (through primary maintenance by Mountainview Ski Centre owner Don Foster), it cuts us off.”