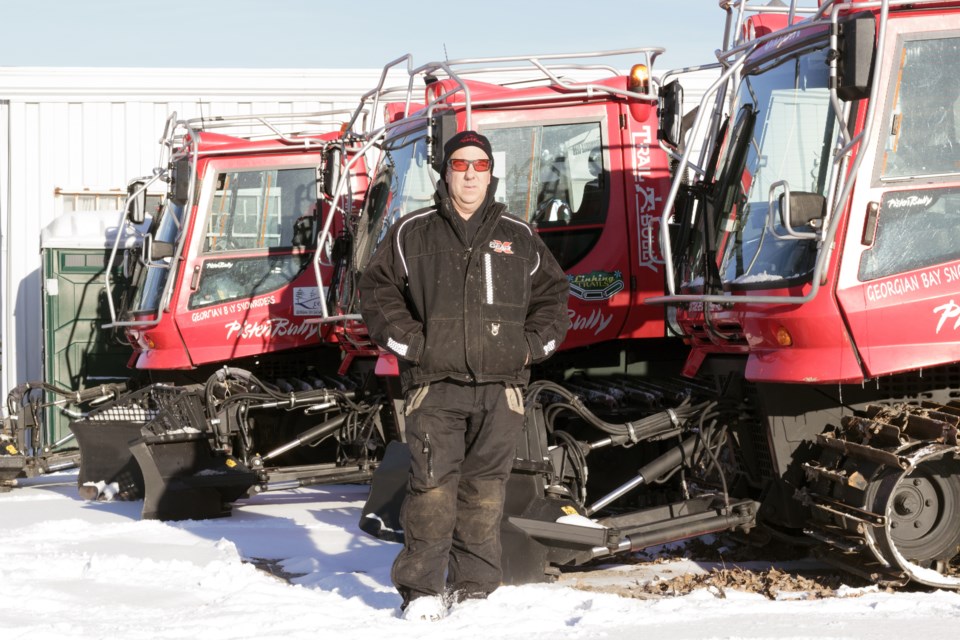 It should be of no surprise to anyone living in North Simcoe, a well-known snowbelt in Georgian Bay, that the accumulation of winter’s precipitation sometimes borders on the legendary.
The Georgian Bay Snowriders (GBSR) snowmobiling club takes full advantage of the scenic trails and beautiful vistas afforded to North Simcoe during the coldest months of the year.

Patrick Murray, 53, has been a director with the Georgian Bay Snowriders for 15 years, and affiliated with the club for the past 30 years. He was born and raised in Midland, and recalls being on a snowmobile with his family as early as age one.

“(I remember) being around all my family and parents’ friends. The beginning of my involvement with the snowmobile club was through my father.”

Murray says transitioning to overseeing the local club was just a natural progression for him.

“I’ve always found myself to be a leader,” said Murray about wanting to become a director, “and when decisions are being made at a table, I definitely like to voice my opinion. And I like to work with the municipalities and our landowners to be able to achieve keeping these trails open.”
The Georgian Bay Snowriders, previously known as the Maple Valley Snowmobile Club and established over 30 years ago, are part of the Ontario Federation of Snowmobile Club’s District 8.

"Our north end — Awenda Park and Cedar Point area, in my opinion — are the best and the least travelled; the most scenic, for sure,” Murray emphasized.
The COVID-19 pandemic has caused as much of a disruption for the GBSR as with every other entity around the world, which has forced the club to implement newer and safer strategies regarding their seasonal maintenance.
“We have some pretty strict policies in place for our grooming operations,” Murray explained, “with masks, and how those machines are disinfected in-between drivers. It does create a little bit of a problem, because normally we would have two people in a machine when we’re trying to get trails open.”
Volunteers for the GBSR maintain the approximately 180-kilometres of trail system that includes Coldwater, Elmvale, Wasaga Beach, Awenda Park and Cedar Point. Preparations typically include the removal of brush from the paths, general maintenance of bridges and curbs, and the renewal of necessary signage.
“Basically, we cannot do that work the same way anymore, and we will be looking for (additional) snowmobilers to help us with that opening procedure.”
That’s not the only challenge Murray has faced as part of the GBSR.

A split runs along the Trans Canada Trail within the Tay Township portion due to a confluence of factors years ago in its inaugural run involving miscommunication, uneducated machine riders, a political reaction and the environmental element.

Earlier this month, Tay Council unanimously rejected a request from the Georgian Bay Snowriders asking for access to portions of the trail.

“The history on that trail,” Murray began, “…part of the ownership and land usage on the CN Rail tracks from Midland to Waubaushene was granted to the snowmobile club. The snowmobile club spent a lot of money putting railings up on bridges and getting that all organized.

“After a couple years of use the township decided that they would pave that trail, and the first year of that trail being used — because it was not properly gated off — some early-season snowmobilers basically scratched the pavement up which caused a knee-jerk reaction from Tay Township to close that trail forever for snowmobile use.”
Murray says he's not aware of any repair work to that damaged pavement since the incident.

"In comparing that to other municipalities we've been running on the pavement — as soon as you cross the bridge at the Wye River and come into Midland, we've been running directly on top of the paved trail, the Trans Canada Trail, for approximately 15 years with little-to-no damage done to that pavement.

“Also,” Murray adds, “we’ve just renegotiated with Penetang Council as of last Wednesday to continue to maintain the Trans Canada waterfront trail for multi-use. This will be our fourth year now on the pavement with zero issue.

“So my question always comes back up: Why is the pavement so fragile in Tay Township?”

Murray also questions why Tay Council stonewalls any further attempts to negotiate a deal for usage.
“After Tay Township kicked us off that trail we were able to get OFSC funding, grant money, to twin that trail; so basically one trail running beside the other. It crosses over the paved portion of the Tay Shore Trail in a certain section but the township lays down rock screening over that pavement to better protect it if there’s any damage.

“From a maintenance standpoint, it’s harder to maintain what we have now compared to a flat-paved surface.”
Whatever hardships the GBSR face, it isn’t enough to offset their generosity and holiday spirit.

“Normally, we give a small token of appreciation to our land owners — approximately 60 private property owners. This year as a club, we decided that money would be better spent pooled together and donated to the Salvation Army for their food bank. We were able to partner with Georgian Bay Meat Company in Coldwater to match donations on behalf of our land owners.
“With all that’s happening with COVID right now, it just made a lot more sense to support the Salvation Army in helping to feed the less fortunate,” said Murray.
The Georgian Bay Snowriders are a passionate group of volunteers, always looking forward with the community in mind. Information on membership, permits, trails, and much more can be found on their website.