Midland’s 'first citizen' was community's key introduction to the YMCA 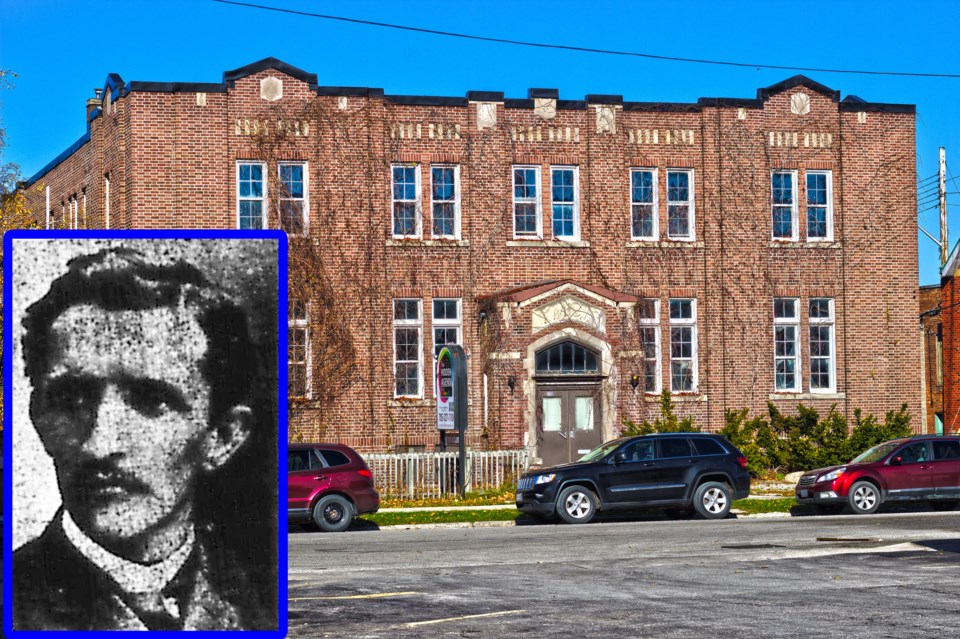 The old YMCA building at 520 Hugel Avenue in Midland was built in 1929 via the generous efforts of Douglas Leland White Jr. (insert, age 30). Derek Howard photo

While Pursuit normally focuses on telling inspiring stories of the present, the bi-monthly series occasionally delves into the people and events of the past that have affected a world they couldn’t have predicted, but which they’d hoped to make better.

Douglas Leland White Jr., known as Midland’s 'first citizen' and the founder of the first YMCA, is one such person; an emigrant who shaped our area with his altruism, generosity and passion.

Before diving into his affiliation with the YMCA, some backstory of White’s history is required to understand how he came to be such a prominent figure in the town’s foundation.

White’s 87-year legacy began with his birth in Albany, New York back in 1858 as the third of eleven children. White’s father was a lumberman and contractor, whom White held in such high regard that he insisted on being called ‘Junior’ well into his own retirement years.

“We went to England and attended Cheltenham College, a public school which prepared boys for Oxford and Cambridge or the army and navy,” said White during a 1936 interview.

Regarding his favourite sports during his school years, White boasted a bit.

“Well, I played a little cricket, and was a fair bowler; when I got back to America, I played some in Albany and later in Orillia, Waubaushene and Collingwood. I also played some soccer football, but perhaps I did best in gymnastics,” he said displaying a trophy he’d won.

Returning to the United States in his late teens and becoming a lumber sorter in 1879 at age 20, White seemed locked into a life which revolved around the Great Lakes lumber industry. Through crafty salesmanship, White rose through the ranks to become a partner in the Saginaw Lumber and Salt Company on Crow Island in Michigan.

White married Ida Moores of Saginaw in 1886 and the couple spent the next decade bouncing between the two locations until 1897 when they returned to Midland to stay. Around that time, White partnered with James Playfair to develop many of the area’s industries. {https://downtownmidland.ca/MidlandHistory}

In 1900, White became a Canadian citizen, and shortly after became Midland’s mayor in what would be the first of three instances. He helped develop Little Lake Park in 1889, secured the Midland Public Library in 1912, worked as Chairman of the Board with St. Andrews Hospital in 1920, and showed much generosity toward Knox Presbyterian Church.

It was White’s love of the YMCA, however, which became his pet project.

“I was always interested in young people, and I suppose I just naturally found my way into it,” said White when asked how he became interested in the YMCA.

In 1903, the first headquarters was situated on the Jeffrey Block's second floor.

“We finally had to give it up in 1911 because there was not sufficient financial support available. When (the YMCA) was re-organized in 1919 at the conclusion of the war, they made me the first Chairman of the Board, and they have never been able to get rid of me since. We had rooms over the present Roebuck store. There were facilities for table games and a reading room but no room for sports.

“After almost ten years of this I made up my mind we had to have something better, so in the spring of 1928, just before I went away on a trip, I called the men who were interested together and I made them a sporting offer. I told them that I would put up a building at a cost of $50,000, and that Mrs. White would spend $10,000 on furnishing it if they would raise a fund of $30,000 for its endowment.”

They succeeded, and the new YMCA building was constructed for $65,000 with $12,000 in furnishings, as well as being completely outfitted with equipment.

On February 5, 1929, it was formally opened and presented to the community as a free gift, to which the Midland Free Press said it was “a very fine building, and has been a model for many other-like buildings in other Ontario towns. It has filled an unique place in the life of the community.”

White died on April 14, 1945 at the age of 87 after a prolonged illness. He was an optimist for the community he loved, shared through his 1936 predictions for the town.

“I am not a pessimist about Midland. I believe we are going to come out of our present difficulties, and that we shall once more be one of the most prosperous of Ontario towns. That can only happen, however, if all classes of citizens will forget about their differences, and work together harmoniously for the benefit of the town.

“We cannot afford to have quarrelling, backbiting, jealousy and intrigue at a time like this. Co-operation with and confidence in each other will work wonders.

“When I came here first in 1887 the people of the town thought the end of the world was coming. The grass was growing on the main street and baseball was played in the daytime at the corner of Hugel Avenue and King Street. Only one mill was running in the town and one in Dollartown.

“Hundreds of men were standing around doing nothing much as they are today. Cook's mill had been closed two years. Logs were being towed to Michigan for manufacture. Then the government passed a law compelling logs to be sawn into lumber in Canada. Andrew Miscampbell bought the Cook mill and the Chew Brothers mill began operation, and soon things were booming again.

“Some kinds of industry which used to thrive here are pretty well gone for good. But Midland is admirably adapted to many other kinds of industry, and if we go after them with patience and perseverance, we shall ultimately get them.

“We should seek first to discover the types of manufacturing that could be carried on most economically and efficiently in this neighbourhood, and then seek to establish them ourselves or bring others in to do so. We have one of the finest harbours to be found anywhere in all Canada, and since we are on the shortest route between Toronto and western Canada, there is no reason why we should not greatly develop our shipping trade. Our tourist business is only in its infancy. The day will come when we shall have fifty summer visitors for one that we have today.”

Said YMCA secretary J.W. Smith upon White’s passing: “Many incidents of his generosity and kindness crowd into one’s thoughts at this time, and will be put away into memory’s storehouse for the future years. His life is a challenge to all of us, to give ourselves more unselfishly to the service of our fellow men.”

The community and citizens of North Simcoe have been made better through the actions of Douglas L. White, Jr., and he is a person of utmost local importance who should never be forgotten.