The charges are connected to an investigation in Collingwood on June 26 that also included a call to the OPP explosive disposal unit
Jul 7, 2020 11:44 AM By: Erika Engel 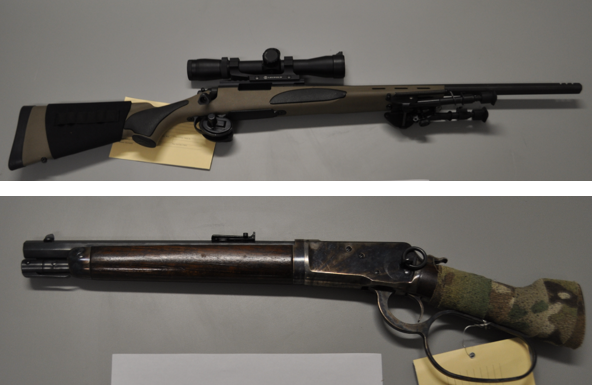 According to Peel Regional Police, these are two of the firearms seized in an investigation into a Collingwood man. Contributed photo

Peel Regional Police have shed some light on an investigation at a Collingwood home that led to a call for backup from the OPP explosives disposal unit on June 26.

Peel police were executing a search warrant in a home in the Creekside subdivision when they discovered a suspicious package and called in the explosive unit. The OPP are overseeing the investigation into the suspicious package, and have not yet confirmed whether the package was a bomb.

However, a news release from Peel police sent out today indicates the package was "deemed not a threat."

Peel police have laid charges against a Collingwood man in connection with their warrant investigation.

On June 25 at 4:20 a.m. Peel police officers "investigated a vehicle" in Mississauga near City Centre Drive and the Robery Speck Pathway. The driver was arrested, and officers report finding and seizing two firearms, two airsoft imitation firearms, ammunition, and fentanyl.

As a result of this investigation, Rafael Lopes, 51, of Collingwood was charged with possession of a weapon for dangerous purposes, carrying a concealed weapon, careless storage of a firearm, possession of opioid, and failure to comply with undertaking.

He had a bail hearing on June 25 in Brampton. None of the charges have been proven in court.

On June 26, Peel police executed two search warrants, one at a home in Toronto and the other in Collingwood.

From the Collingwood home, police report discovering and seizing 18 pistols and 11 long guns.

Another pistol and four long guns were seized from the Toronto home, according to the Peel police news release.

Anyone with information regarding this incident is asked to contact investigators with the 11 Division Criminal Investigation Bureau at (905) 453-2121 ext. 1133. Information may also be left anonymously by calling Peel Crime Stoppers at 1-800-222-TIPS (8477), or by visiting www.peelcrimestoppers.ca.