TORONTO — Auston Matthews felt safe in Arizona — until he wasn't. The star centre for the Toronto Maple Leafs confirmed Monday that he tested positive for COVID-19 last month in his home state.
Jul 14, 2020 1:11 AM By: Canadian Press 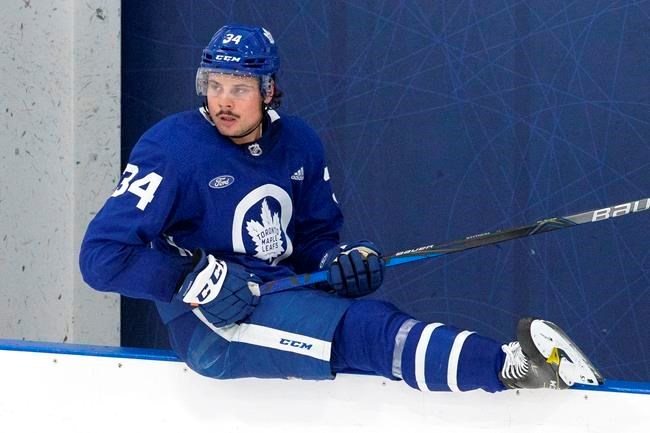 TORONTO — Auston Matthews felt safe in Arizona — until he wasn't.

The star centre for the Toronto Maple Leafs confirmed Monday that he tested positive for COVID-19 last month in his home state.

Matthews shared the news as the team opened training camp ahead of the NHL's restart after the league was shut down by the novel coronavirus back in March.

"Yea, I did," the 22-year-old said on a video conference call following practice when asked about the initial report by The Toronto Sun. "(It) didn't really enter my training. I was able to do stuff at home, obviously wasn't able to leave or skate or anything.

"That's really the only thing that took a hit for me. I was skating beforehand, and having to take 2 1/2, three weeks off the ice catches up to you, but pretty much asymptomatic, felt for the most part pretty normal for the two weeks. I did my quarantine and I'm feeling healthy now, so it's all good."

The Sun first reported June 19 that Matthews contracted the virus while at home in Scottsdale, Ariz., and was in quarantine.

The Leafs declined to confirm the report at the time, citing the privacy of medical records.

Arizona is among the U.S. states that has seen a recent spike in positive tests for the virus.

"It was not a hot spot for like two months," said Matthews, the first of more than 50 NHL players to publicly acknowledge a positive test. "It was like the safest place to be and then obviously things flipped pretty quickly there. I don't really find it too different than it is here.

"Lots of stuff, for the most part, closed other than outside seating and essential services."

The NHL has forbidden teams from releasing information on positive tests, making Matthews potentially the only player to be confirmed during the league's resumption of activities.

"(There's) still such so much unknown with the virus," Leafs captain John Tavares said when asked to explain why it's important to players that positive cases remain anonymous. "We're learning so much more daily, weekly. Things change so much. There's obviously a lot of attention around it.

"Your health is a big thing, a big deal. This has been a big shock to everyone over the last number of months, and we're still learning a lot about it. Still trying to get the grasp the virus and making sure that we're handling it the right way."

Toronto winger Mitch Marner said he learned of the Matthews situation the same way fans did, and immediately texted his friend and teammate.

"This (virus) is not a joke and something you can't take lightly," said the 23-year-old. "He was feeling well and not really feeling (many) of the symptoms.

"It's great to have him back out there."

"That happened right around a time when it started to hit the NHL in general with bigger numbers, and it was right there," said the rookie bench boss. "That was just a bit of a bump to all of us in terms of paying attention to the protocols, taking this very seriously.

"That really allowed everybody to just tighten up and make sure we were doing all the right things to stay healthy ourselves and then of course making sure that we're doing our part to keep our room healthy and keep everybody that comes in healthy so that we can continue to work towards a safe return."

Matthews, who isn't able to pinpoint when or where he contracted the virus, finished the regular season tied for second in the NHL with 47 goals to go along with 80 points in 70 games. The Leafs are set to open a best-of-five playoff qualification series with Columbus on Aug. 2 in Toronto, which is serving as one of two hub cities, along with Edmonton.

The NHL added that over 600 players reported to their club's training facilities for Phase 2 — which featured players training in small groups at their teams' facilities — and that 4,934 COVID-19 tests were administered.

Despite the sharp rise in cases in the U.S., Matthews said he believes the league's 24-team restart can succeed north of the 49th parallel.

"I think everybody's experience will probably be different than my own as far as COVID goes and stuff like that, and symptoms," he said. "It's hard to kind of pinpoint the norm because it's different for everybody.

"But the NHL and everybody have tried their best with the information that they have to make it as safe as an environment as possible."

This report by The Canadian Press was first published July 13, 2020.

Navy investigates video of dogs attacking Kaepernick fill-in
Aug 3, 2020 4:50 PM
Raptors' Kenneth (Kenny Got Work) Hailey collects another NBA 2K League award
Aug 3, 2020 4:44 PM
Comments
We welcome your feedback and encourage you to share your thoughts. We ask that you be respectful of others and their points of view, refrain from personal attacks and stay on topic. To learn about our commenting policies and how we moderate, please read our Community Guidelines.