Royal acknowledgement 'very exciting,' says official, noting accolades from 'such a powerful person' are welcomed by the group and its volunteers

Derek Howard, Local Journalism Initiative Reporter
Aug 23, 2022 2:30 PM
Previous Next
The Friends of Wye Marsh have adopted Swan C70 and named her Elizabeth in honour of the Queen’s 70 years on the throne.Wye Marsh Wildlife Centre photo
Expand
Listen to this article
00:03:27

It seems the Friends of Wye Marsh have their very own swan princess.

Swan C70 was adopted by the Friends of Wye Marsh earlier this year and, in honour of the 70th anniversary of Queen Elizabeth II ascending to the throne, she was given the name Elizabeth.

A letter was sent to Buckingham Palace during the Queen’s Platinum Jubilee to inform the monarch of the swan’s adoption.

“Once common in the province of Ontario, these magnificent birds were extirpated more than 200 years ago. Then, the Friends of Wye Marsh joined forces with the Ontario Trumpeter Swan Restoration Group to reintroduce the species to the area. Today, almost 30 years after the first captive pair arrived at the marsh, we once again have a thriving self-sustaining population of wild trumpeters swans,” stated the letter send across the pond.

“As the trumpets ring out, and jubilee festivities take place across the Commonwealth, please know that the Friends of Wye Marsh will be thinking of you each time we are graced with ‘C70’ in our midst, our very own Elizabeth.” 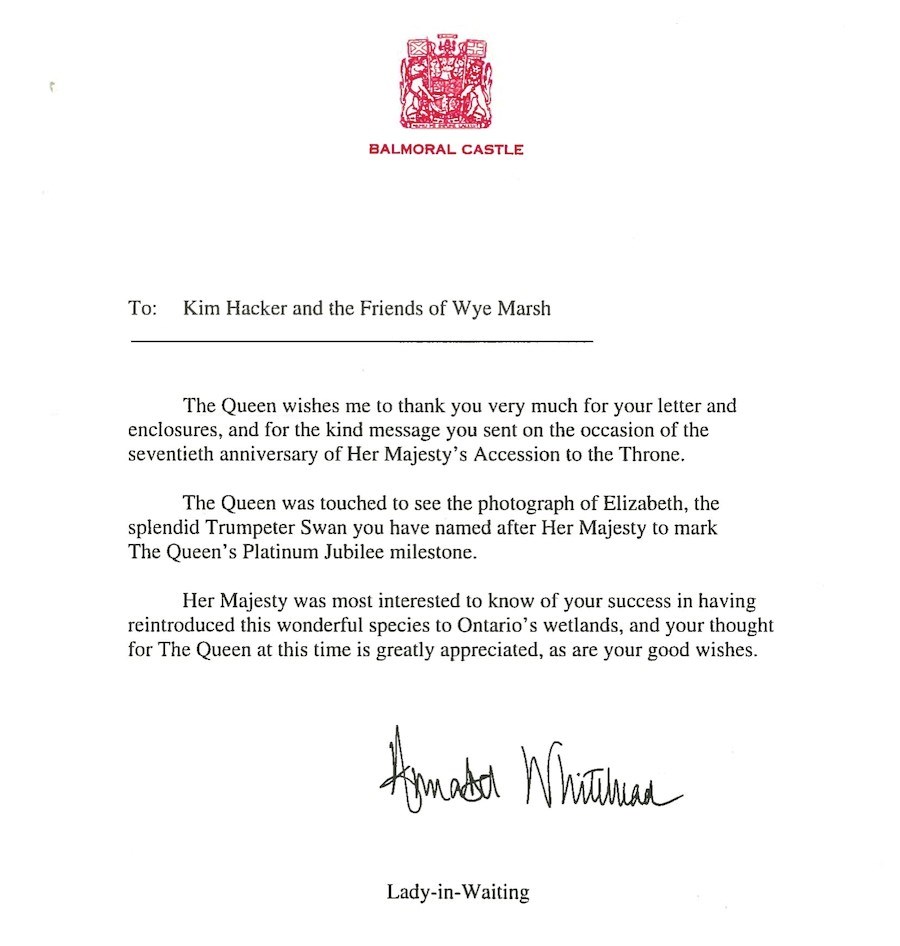 Executive director Kim Hacker signed the letter to the Queen, and this week the Wye Marsh, much to its surprise, received a response.

“The Queen was touched to see the photograph of Elizabeth, the splendid Trumpeter Swan you have named after her Majesty to mark The Queen’s Platinum Jubilee milestone,” replied lady-in-waiting Annabel Whitehead.

“Her Majesty was most interested to know of your success in having reintroduced this wonderful species to Ontario’s wetlands, and your thought for The Queen at this time is greatly appreciated, as are your good wishes.”

Hacker was excited to receive the Queen’s response.

“It’s very exciting for us because we work hard to try to protect the environment, so to have the acknowledgement from her thanking us for the work we do with swans, it felt really powerful and our volunteers felt really touched to have their regular efforts recognized by such a powerful person,” Hacker said.

The swan-monitoring volunteers at the Wye Marsh were Hacker’s primary focus of praise. She noted their hard work and tireless efforts to track the swans and provide data for the scientific community throughout the decades were what made instances such as this possible.

Queen Elizabeth II is also known as the Seigneur of the Swans in the United Kingdom, extending to a conservation tradition where ‘swan uppers’ corral swans on the Thames River to track population and health for their local wildlife.

Visitors to the Wye Marsh hoping to catch a glimpse of Elizabeth may not be guaranteed a sighting due to the migratory patterns of trumpeter swans.

“People can visit Wye Marsh any time, any day, but our swans tend to be further afield, spread out through the province as far as Burlington until around Thanksgiving and then they start coming back,” said Hacker.

As for spreading the importance of conservation efforts at the Wye Marsh, Hacker stated reaching out to an interested school child is most important.

“To be fair, it’s probably more important because that child is going to grow up and have opportunities to (take on efforts) on their own,” Hacker said. “So, while it’s very exciting to be acknowledged by the Queen, it’s more important to touch the heart of a child who may continue those conservation efforts.”

The Wye Marsh Wildlife Centre is located at 16160 Hwy. 12 E. in Midland. Further information on programs, activities, hours of operation, and how to get involved as a volunteer is available on the Wye Marsh website.

Derek Howard covers Midland and Penetanguishene area civic issues under the Local Journalism Initiative, which is funded by the Government of Canada.
Read more

How does the Midland average car insurance rate compare to other cities in Ontario?

Get Connected to the Village Media Network!