Penetanguishene police services board should only meet virtually for now, CAO says

Board members did not concur with chair's request to consider an in-person meeting in December
Sep 15, 2020 6:30 PM By: Mehreen Shahid 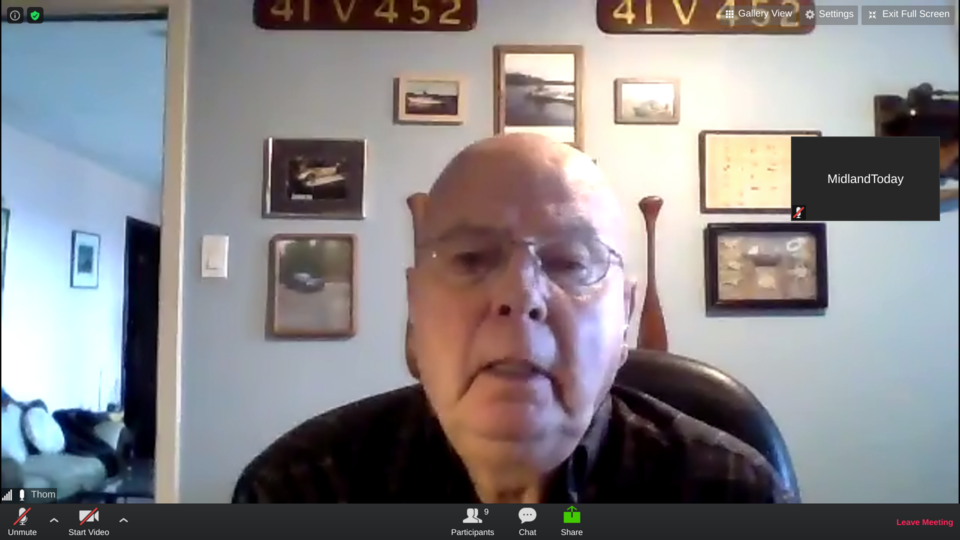 Penetanguishene Police Services Board member Thomas Lackie said there's no hurry to get back to in-person meetings. Mehreen Shahid/MidlandToday

Penetanguishene's CAO says the town's Police Services Board (PSB) can't deviate from the virtual meetings protocol set by council and the health unit after being asked whether members could get back to in-person meetings.

"Given the fact that our schools are now back in session, how do members of the board feel about moving away from virtual meetings at our December meeting and going to a face-to-face meeting at town hall?" asked PSB chair Brad Saunders. "There's lots of room for social distancing."

Saunders said his request was coming not only from technical issues he experienced at the mot recent meeting, but also that he found Zoom meetings to be a bit frustrating.

"I understand from Jeff (Lees) that council is not giving it any thought before the New Year, but December is a long way off," said Saunders. "Personally, I'm very, very comfortable with having a face-to-face meeting again."

Lees, the town's CAO, however, explained why it would not be prudent at this time to move to in-person meetings.

"We all know that locally and provincially the numbers are not heading in the right direction," he said. "As levels of government, we need to ensure we're stewards in proceeding with caution and not jumping too far ahead into doing public meetings in an in-person manner."

Lees said he realized board and committee members are anxious to get back to in-person meetings, as is he, but the town has provincial and health unit guidelines it has to follow.

"All members would need to be masked up throughout the entire meeting," he said, talking about some of the requirements of possible in-person meetings. "For public speaking purposes, we would need to maintain a four metre separation, which is a guideline from the local health unit."

Additionally, Lees said, staff would want to make sure the decision is made with approval from the various levels of government involved, including the town's emergency control group.

"I would suggest to the board that, at the very least, we hold off and get through the December meeting electronically," he said. "Council certainly will be considering between now and the end of the year what happens with meetings, council and various committees. I would like to ensure that we loop council in collectively so we don't have various committees and various boards doing in-person meetings where council has made a decision to keep them electronic."

"I concur with Jeff," he said. "It shouldn't be our decision. Whatever's happening with town council, should be what we do. There's no hurry."

Coun. Brian Cummings, who was chairing the meeting, also agreed.

"I think things are changing daily right now," he said. "It's really an unforeseen future for meetings right now and hopefully things will settle down and there will be a change. However, for the time being we will stick to what Dr. (Charles) Gardner is saying and hold virtual meetings until we can safely go back to council chambers for our meetings."

Nevertheless, Saunders said he wanted the possibility of an in-person meeting on the agenda for the next meeting slated for December 7 for further discussion.

COVID-19: Why responsible health data management is critical during the pandemic
Sep 25, 2020 9:25 AM

Good morning, Midland!
Sep 25, 2020 6:00 AM
Comments
We welcome your feedback and encourage you to share your thoughts. We ask that you be respectful of others and their points of view, refrain from personal attacks and stay on topic. To learn about our commenting policies and how we moderate, please read our Community Guidelines.