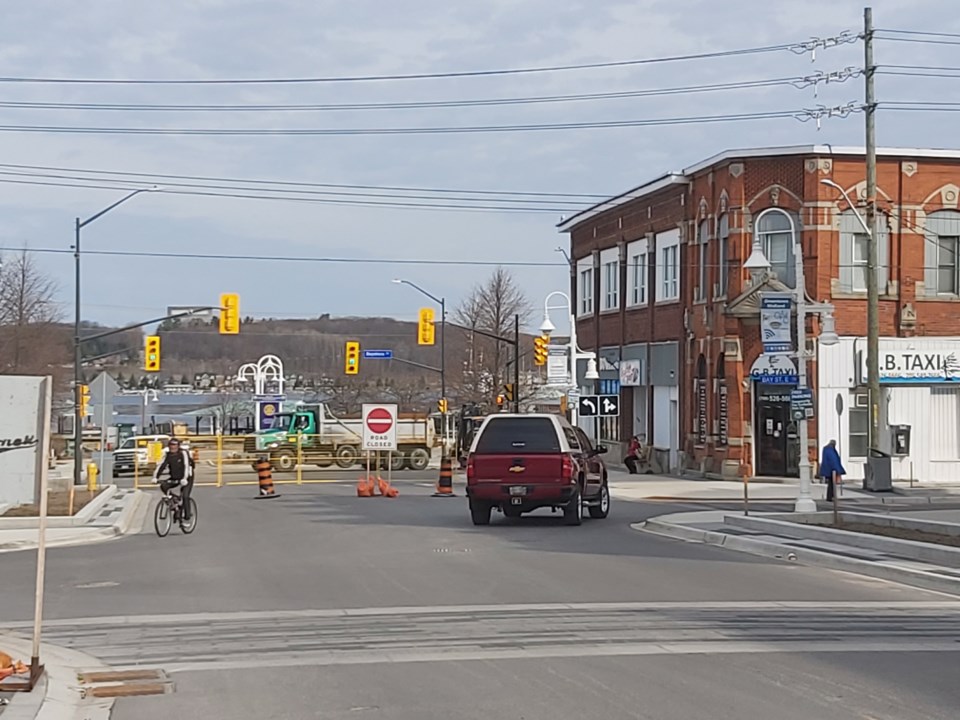 Starting earlier this week, phase three of the King Street Rejuvenation project began with crews working to complete by the end of May.

And unlike earlier phases that featured a great deal of infrastructure work, this construction phase won’t result in the overall closure of King Street.

However, isolated closures will occur at specific intersections (such as Bayshore Drive and King Street this week) to allow for the installation of crosswalks. And only one intersection will be closed at a time and Arnott Construction will erect detour signage to direct traffic flow. As well, parking lots, laneways and sidewalks will remain open.

Besides the crosswalk installation, Midland is beginning the process of beautifying the downtown.

To help out in that regard, the town secured a $250,000 grant earlier this year through the Rural Economic Development (RED) Strategic Economic Infrastructure Stream.

The funds will be used to assist with streetscaping costs for the King Street Rejuvenation Project and will include items such as street furnishings, trees and plantings, and a public art installation to reinvigorate Midland’s distinctive and memorable downtown.

In late November, the town officially opened King Street to both pedestrian and vehicular traffic, pronouncing the $14-million construction project that’s been talked about for years, but only really got moving into a possibility four years ago, a great success.

“The construction phase of the King Street Rejuvenation Project was completed on-time and on-budget through the COVID-19 pandemic, providing Midland with a modern, fully-accessible main street,” Mayor Stewart Strathearn said at the time.

The ‘big dig’ project saw Midland’s main street dug up from Yonge Street north to Bayshore Drive, to replace underground infrastructure (storm/sanitary systems, and watermains), create a new road alignment that allows for a flexible configuration along the street for parking and events, and to make the roadway completely accessible with mountable curbs and upgraded traffic signals.

Strathearn said the town was able to combine a necessary project like completing infrastructure upgrades with one that creates better aesthetics and a more visually appealing downtown.

As well, he noted the town has rich history and as a focal point, King Street plays a large role.

“This rejuvenation project will help maintain this history and solidify Midland as a leader in Simcoe County and a top tourist destination.”

Check out the Big Dig website for more information, including a list of stores with back entrances.