MBLDC chair said incorporating dock management into the overall development plan would be a significant alteration from their current mandate
Jan 26, 2021 7:29 AM By: Mehreen Shahid 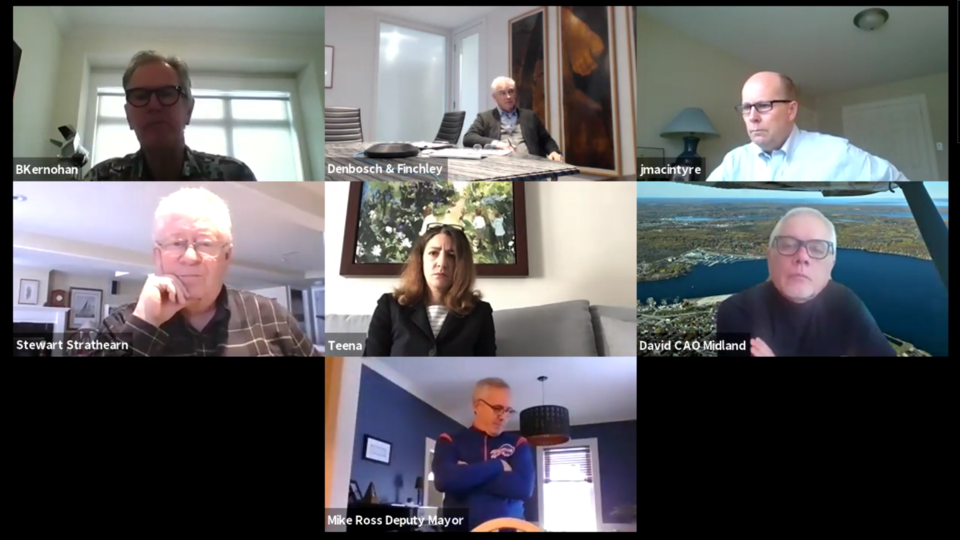 A Midland Bay Landing Development Corporation meeting this month discussed the possibility of cruise ships at the coal docks.Mehreen Shahid/MidlandToday

Some major changes could be cruising into the Midland Bay Landing project.

The matter was brought up by Mayor Stewart Strathearn at a recent Midland Bay Landing Development Corporation (MBLDC) meeting, during which he talked about a staff report from December that referenced two major cruise lines wanting to use Midland as a terminus (a port from where traveller embark or disembark).

The report states that Viking Cruises and the Ritz-Carlton Yacht Collection have committed to begin in 2022 and 2023. The former company wants to use Midland as a turnaround port (for embarking and disembarking), which would see between 300 and 400 international tourists staying in the town's hotels and spending in the community. These new ships are over 600 feet long, which is too large for the town dock, a perfect fit for the coal docks.

Strathearn's purpose of bringing this up at an MBLDC meeting was to assess interest around the table.

"I'm just wondering whether it would be in our interest to merge the two projects, site development and customs port, in some manner," he said.

The reaction was mixed.

Board chair Bill Kernohan said he was unaware of this concerted effort by the Town of Midland to open the town further to the cruise industry.

"I think before we decide how to approach this or to merge the projects, we need a further conversation with the town to ensure that any use of the Midland Bay Landing property is consistent with the overall plan," he said. "This would be a significant alteration."

To accommodate larger cruise ships, Kernohan said, the town would likely have to create an arrival area, which would also incorporate customs and immigration.

"We love the idea of the cruise ships," he said. "I think we just need to align the different interests to make sure we're all working toward the same goal."

"I want to reach out from my real estate background and make it clear to all parties that the term of this agreement is imperative and should be short with a realistic out clause for the town," said Barber, managing partner, Den Bosch & Finchley Inc., a Toronto-based design-build company.

"We want to start marketing this property to the interested parties, it’s difficult to sell property when you have a tenant. It could significantly encumber our efforts to market the property properly, unless we have a timeline we can communicate to the marketplace."

Fellow board member, John Macintyre, had a different view.

"If we’re going to have alignment on that, we should probably consider our design process to be an integrated one," he said. "We’ve already gone through a process to identify a preferred supplier for the design services, so it may make sense to combine those two projects and get them kick-started now. Even from a design standpoint, it could be a phased situation where we do part of it this year and finish off the rest of it next year."

In a separate conversation with MidlandToday, Strathearn shared some more information around the cruise ships arrival in Midland.

"There's a budget allocation yet to be approved to create a port of entry or a customs port at the coal dock," he said, talking about the $50,000 that will be brought to council during budget deliberations. "That would be a temporary thing while the development corporation looks at what we might do in the longer term for the whole harbour itself.

"Another site that was considered was the old winter berth, just south of Pettersen Park," added Strathearn.

He said he wasn't aware what kind of work would need to be done at the dock.

"We’re going to have to provide road access," he said. "We may have to bring electricity. I’m sure it will come to council, I’m not sure when."

As for sight-line issues, it might be something to watch in the short term, he said, adding the arrival of the Pearl Mist brings crowds to the waterfront just to see the ship.

Addressing the environmental concerns around emissions, he said, these brand new ships would most likely be state-of-the-art and more friendly on the environment.