Correctional officers experience homelessness for themselves 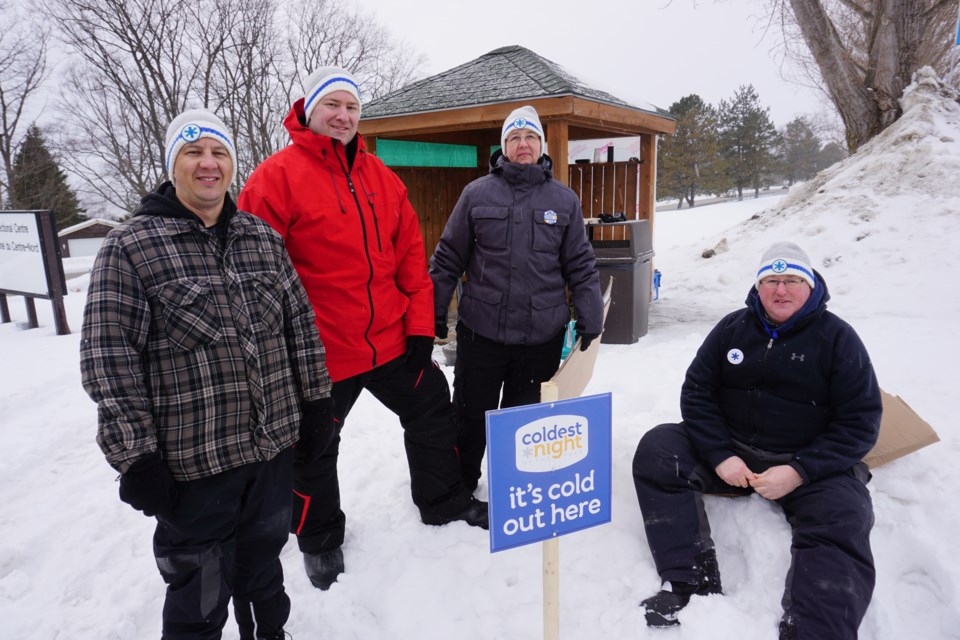 But Wednesday night, the Central North Correctional Centre employee slept outside in support of those who aren’t lucky enough to have a place to call their own.

“We’re only doing it for one night,” Dionne said as he huddled under a small wooden shelter a stone’s throw from the Penetanguishene superjail.

“When this is over, I can go home to a hot shower, a warm bed and a fresh pot of coffee. They (the homeless) don’t have that option.”

Dionne said he fully expects the CNCC Local 369 team to reach its $3,000 goal with funds going towards local Coldest Night of the Year efforts that wrap up with a community walk in Penetanguishene Saturday.

“We’ve had a few visitors drop by to see us so far today,” Dionne said, noting some dropped off donations with a group from Waypoint Centre for Mental Health Care also stopping by for a visit.

While Dionne also participated in the annual fundraiser by sleeping in the elements for 24 hours last year, he was joined this time around by fellow correctional officers and Local 369 members Ryan McDermott, Ann Hannigan and Bill Auchterlonie.

“Richard did it alone last year and I spent part of the day with him,” Auchterlonie said. “With the growing number of homeless in our area, I felt this was important to do to show support.”

Using cardboard boxes as their blankets, the quartet was hoping for another visit from a friend bringing coffee, tea and/or hot chocolate as the evening temperatures continued to plummet with the anticipated snow squalls forecast for the region.

“Cardboard boxes are the luxury item this year,” Dionne said, noting the 24-hour challenge is part of a provincewide initiative by correctional workers across Ontario. “The majority of institutions are participating. This gets us out there with the other first responders.”

Dionne said there’s also a strong correlation between his workplace and those experiencing homelessness.

“The guys that we release do end up homeless,” he said.

Auchterlonie said he often encounters someone who’s just been released from the jail while he’s out walking in Midland.

“You see the guys in downtown Midland walking to try to stay warm or you see them having a coffee and they’ve got plastic bags in their running shoes to try to keep their feet warm.”

Saturday’s Coldest Night walk is hosted by the Guesthouse Shelter & Community Hub and Waypoint with organizers hoping to raise $20,000 for local programs.

This marks the fourth year Waypoint has been involved with the event with the Guesthouse coming on board last year.

Starting from the town’s arena, walkers have a choice of a two-, five- or 10-kilometre route. Registration begins at 3 p.m., followed an hour later by opening ceremonies and the walk. There will also be a light meal for volunteers and walkers served from 5 to 7 p.m.

Penetanguishene’s Coldest Night event is part of a national campaign aimed at increasing awareness about homelessness and raising money to support the efforts, locally, to combat the issue. The local effort is one of close to 130 held across Canada with nearly 20,000 taking part annually.

Some of the funds raised this year will go towards the Chigamik Waypoint Community Health, which includes supportive housing programs for those leaving in-hospital care.

Drive Test to hire additional examiners to address backlog of road tests
Oct 30, 2020 7:56 PM
Comments
We welcome your feedback and encourage you to share your thoughts. We ask that you be respectful of others and their points of view, refrain from personal attacks and stay on topic. To learn about our commenting policies and how we moderate, please read our Community Guidelines.