SEOUL, Korea, Republic Of — Japanese pop sensation ARASHI has a big surprise for fans as they near their planned hiatus at year's end: a collaboration with Bruno Mars on their first all-English single.
Sep 25, 2020 9:22 AM By: Canadian Press 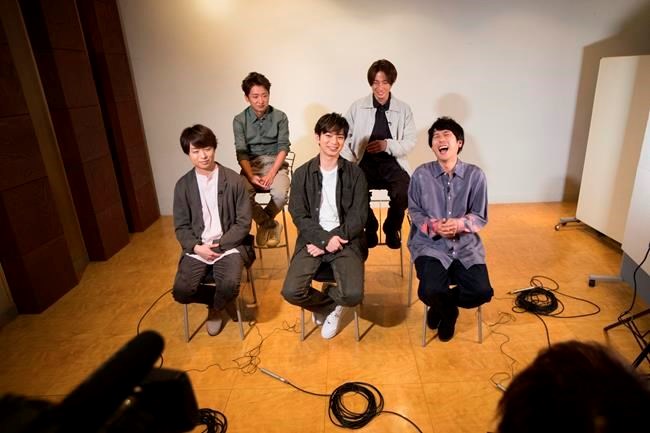 SEOUL, Korea, Republic Of — Japanese pop sensation ARASHI has a big surprise for fans as they near their planned hiatus at year's end: a collaboration with Bruno Mars on their first all-English single.

The band told The Associated Press the multi-Grammy Award-winning musician delved into their back catalogue to understand their unique sound while working on the single that was released last week.

“He took into consideration that we are going on hiatus,” said Jun Matsumoto, adding he feels their song, “Whenever You Call,” will appeal to both their hardcore fans and “those who do not know about us.”

“We have been releasing music only in Japanese,” Sho Sakurai explained. “In that sense, foreign audiences who can understand Japanese could recognize us. But this time we sang the song in English. Bruno provided us the opportunity to reach out to a foreign audience.”

The group, which also includes Satoshi Ohno, Masaki Aiba and Kazunari Ninomiya, embodied their name — ARASHI means storm — by becoming one of Japan's boyband legends and maintaining their crown for more than two decades.

The band has released over 400 songs, sold over 41 million records and performed for 14 million people, according to their label, and they've also had parts in movies, Japanese dramas and shows, and commercials.

Despite their success, ARASHI shocked fans by announcing their hiatus, halting all band activities at the end of this year.

The Netflix documentary about the band shows it wasn’t an easy decision. In “ARASHI's Diary -Voyage-,” Sakurai said his hands were “trembling” as he wrote down potential options, including disbanding and hiatus.

Sakurai hinted the members might not pursue solo music careers after the hiatus.

“There are things that won’t be accomplished if there aren’t these five members. To simply put, it’d be like singing, dancing, connecting through music, et cetera,” he said. “I think these things are difficult to pursue individually.”

As for the most memorable moments from their career, Aiba fondly recalled concerts in Japanese National Stadium and Hawaii. Matsumoto described a trip to Los Angeles around two years ago, when they revisited and took identical photos at places they visited 20 years ago.

With about three months left until their hiatus, the band is keeping busy despite the coronavirus pandemic.

Matsumoto said the band is considering a livestreaming concert.

“I want to deliver our music to as many people as possible, so we are working hard on it,” he told the AP.

T-Mobile offers up yet another TV streaming service
Oct 27, 2020 3:53 PM
Comments
We welcome your feedback and encourage you to share your thoughts. We ask that you be respectful of others and their points of view, refrain from personal attacks and stay on topic. To learn about our commenting policies and how we moderate, please read our Community Guidelines.