BEIJING — Shanghai has imposed lockdowns on two of China's best-known hospitals after they were linked to new coronavirus cases. Outpatient services have been suspended at Fudan University Shanghai Cancer Center and Renji Hospital.
Jan 22, 2021 8:46 AM By: Canadian Press 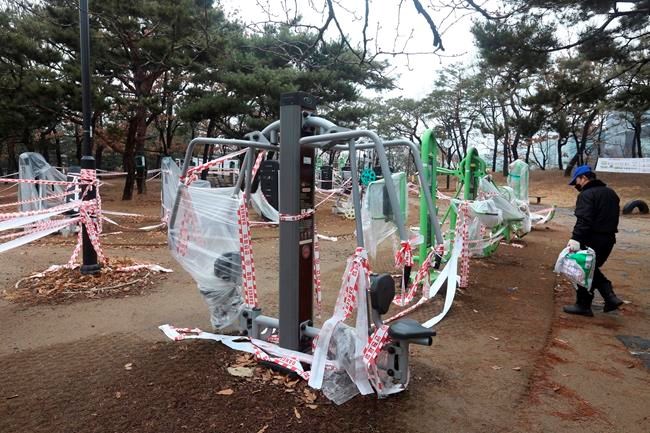 BEIJING — Shanghai has imposed lockdowns on two of China's best-known hospitals after they were linked to new coronavirus cases.

Outpatient services have been suspended at Fudan University Shanghai Cancer Center and Renji Hospital. They have been cordoned off, along with some surrounding residential communities.

After months of quelling small clusters with mass testing, isolation and social distancing, China has seen outbreaks grow this winter, mainly in its frigid north. The National Health Commission on Friday announced 103 new cases had been detected over the past 24 hours.

Lockdowns have also been imposed in parts of Beijing and other cities following outbreaks, schools are letting out early and citizens have been told to stay home for next month’s Lunar New Year holiday. China hopes to vaccinate 50 million people against the virus by the middle of February.

Shanghai had six of the cases reported Friday. The two hospitals were put under lockdown after suspected cases were found at them on Wednesday and Thursday. It’s not immediately clear if any additional cases were linked to the hospitals.

Heilongjiang province in the far north reported 47 new cases, followed by Jilin just to the south with 19 and Hebei province just outside Beijing with 18. Beijing itself recorded three new cases.

Chinese hospitals are currently treating 1,674 patients for COVID-19, of which 80 are in serious condition, while another 929 are under observation for testing positive without displaying any symptoms.

In other developments in the Asia-Pacific region,

— Japan is publicly adamant that it will stage its postponed Olympics this summer. But to pull it off, many believe the vaccination of its 127 million citizens for the coronavirus is key. It’s an immense undertaking in the best of circumstances and complicated now by an overly cautious decision-making process, bureaucratic roadblocks and a public that has long been deeply wary of vaccines. Japan hopes to start COVID-19 vaccinations in late February, but uncertainty is growing that a nation ranked among the world’s lowest in vaccine confidence can pull off the massive, $14 billion project in time for the games in July, casting doubt on whether the Tokyo Olympics can happen. Japan is under a partial state of emergency and struggling with an upsurge of infections. There have been about 351,000 cases, with 4,800 deaths, according to the health ministry.

— South Korea has reported its smallest daily increase in coronavirus infections in two months as officials express cautious hope that the country is beginning to wiggle out from its worst surge of the pandemic. The 346 new cases reported by the Korea Disease Control and Prevention Agency on Friday brought the national caseload to 74,262, including 1,328 deaths. The agency said 240 of the new infections were from the greater Seoul area, home to half of the country’s 51 million people, which was hit hardest during a weekslong surge in transmissions that began in mid-November. Health authorities have clamped down on private social gatherings since late December, including fining restaurants that accepted large groups of diners. After a Christmas Day high of 1,241, daily new infections have slowed to around 400 to 600 in recent weeks, and officials eased some of the social distancing rules.

— Sri Lanka on Friday approved the Oxford-AstraZeneca vaccine for COVID-19 amid warnings from doctors that front-line health workers should be quickly inoculated to prevent the medical system from collapsing. Minister for Pharmaceutical Production and Regulation Channa Jayasumana said the vaccine is the first to be approved for emergency use in Sri Lanka, while several other candidates are in the pipeline at the National Medicines Regulatory Authority. It is unknown when Sri Lanka will be getting the vaccine. “Hundreds of health care workers have tested positive in several hospitals. When you have one positive case, about 10 health workers will need to be sent to quarantine. The system is collapsing day by day,” said Dr. Haritha Aluthge from the Government Medical Officers’ Association, the largest doctors’ union in the country. In the past three months, Sri Lanka has reported more than 52,000 new patients and 260 deaths. Between 500 to 900 new cases are reported every day.

— Myanmar on Friday received its first shipment of COVID-19 vaccine, a gift of 1.5 million doses from India. The vaccine was developed by Oxford University and the pharmaceutical company AstraZeneca and was produced under license in India. India has begun shipping supplies of the vaccine to several countries, including Bangladesh, which received 2 million doses. India’s vaccine delivery comes after Chinese Foreign Minister Wang Yi promised last week during a visit to Myanmar a donation of 300,000 doses of its own vaccine. The gifts by India and China are examples of what has been called vaccine diplomacy in a country where the two powers vie sharply for influence. On Thursday, Myanmar’s Health Ministry announced 446 new cases of the coronavirus along with 16 new deaths. It has reported a total of 136,166 cases, including 3,013 deaths. “In the coming weeks, we will have another batch of vaccines from other countries. Some are ones we bought,” public health official Tun Myint said. India's embassy said Myanmar has signed an agreement with vaccine producer Serum Institute of India to procure additional doses.