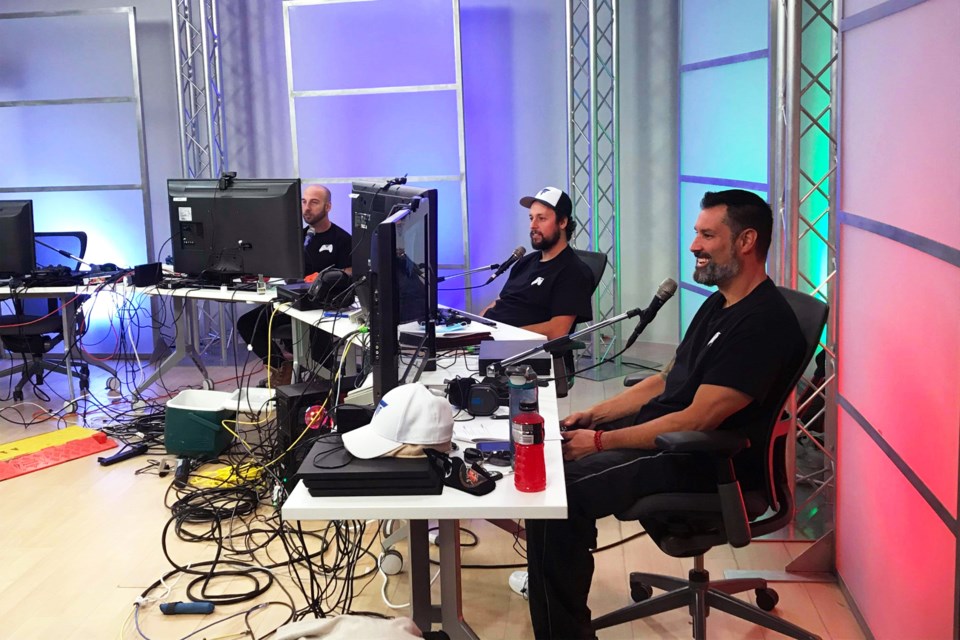 Fundraising telethons have been a part of our lives since the earliest days of broadcasting, providing our homes with entertainment from famous local and superstar celebrities in support of a good cause.
Modern livestreaming video games are simply the most recent iteration of the medium, such as this past weekend’s debut 24-hour marathon event The ‘BIG’ Game, which raised $1,456.59 for Big Brothers Big Sisters of North Simcoe.

Four hosts of Inside The Game, a video game television show on Rogers TV, played 24 different games for each hour on September 18th & 19th, simulcast on both Rogers TV Midland as well as the video game livestreaming Twitch.tv website.

“The first 12 hours went relatively smooth,” says Drew Beausoleil, CEO of Inside The Game and co-host of the event. “You’re used to gaming during the day until late in the evening. But when you get into that 2 to 4, even 5 o’clock in the morning, you feel your body tell you ‘Hey you know, you should maybe head to bed.'

“But when you have your community behind you, and the fans are rooting for you to keep going and push for a great cause— and that’s what it all comes down to; we’re there to support Big Brothers Big Sisters— it’s just a great time.”

Along with co-hosts Nate Quinn, Cory Askew, Adam Finlay and with help from behind-the-scenes tech operators Steve Radley and Kyle Aymer, who occasionally joined in on the fun, the broadcast lasting from noon until noon never stopped providing fun. Games they played ranged between first-person-shooters like Rainbow Six Siege and Fortnite, survival games like Grounded, casual multiplayer titles like Overcooked! 2 and Fall Guys, to simple pleasures like PGA Tour 2K21 in the wee hours.

Inside The Game provided much of the filler content between portions, from developers like HitGrab Inc and Omeda Studios, game and peripheral reviews, and also featured spots from gaming persona Major Nelson as well as interviews with local Big Brothers and Big Sisters themselves. Additionally, prize raffles were awarded for two virtual-reality units: the HTC VIVE Cosmos Elite as provided by Valve, and the Google Stadia kit from Google.
Hunter Markle is the fundraising & community development coordinator for Big Brothers Big Sisters of North Simcoe, and (along with Executive Director JoAnn Stephan) had approached Beausoleil for the unique livestreaming opportunity.
“Typically, if it was not a COVID year,” says Markle, “we would have four signature events that we plan each year, which also include Curl for Kids Sake and Bowl for Kids Sake. This year is looking a bit different, so we weren’t able to host those events; but we are looking next year to create a catch-all weekend, of a Play for Kids Sake weekend where people would get to choose which event they’d like to do.
“We are certainly going to be doing this gaming event again. We actually were just speaking with Drew. The boys are excited, Rogers is excited, and we’re really excited too. Now, having experienced what the first version of this looks like, (our goal) is to take it to the next level and see how we can grow it.”
Video game charity marathons have gained popularity with the medium’s interactive community. Desert Bus for Hope has raised more than $6 million for Child’s Play since 2006; Extra Life has raised over $70 million USD since 2008 for sick and injured kids; and Games Done Quick’s semi-annual speedrunners have raised more than $8 illion USD for Médecins Sans Frontières, the Prevent Cancer Foundation and other charities since 2011.

“There’s nothing like getting a group of friends together and partying it up in one place to game— hooting, hollering, and having a great time. And that’s one of the best things that video games do; everything’s there to have fun," Beausoleil explains.

“And it was a blast to do that, even if it was for 24 hours and we were exhausted at 4 in the morning,” he exclaimed with a laugh. “We were still laughing, and that’s what video games are able to do.”
It wasn’t just a win for Big Brothers Big Sisters of North Simcoe and a win for the community either. While coming tantalizingly close in Fall Guys, it was Askew and Finlay’s experienced prowess within Fortnite that garnered a win for the quartet as well.
Inside The Game has compiled an hour-long montage of the full day’s event for viewing on YouTube.

Markel additionally brought up that the organization is currently looking for mentors for 18 young boys and six young girls, assuring participants that becoming a Big Brother or Big Sister is feasible and rewarding.
“If you think (mentorship is) something you’re not capable of, I can tell you that you’re doubting yourself too much. You have everything that a child needs; they are just looking for someone to spend time with, to listen to them and to have fun with them. If you feel like you need some time to just feel like a kid again and to relax, you can do that through an hour a week of in-school mentoring or school-based mentoring; how it’s being adapted right now.

“Or if you have a little bit more time to give-- two-to-four hours every week,” she adds, “you make a significant difference in a young person’s life.”

Visit the organization's website to apply for mentorship, to learn about your opportunity to contribute to the organization or to see further details about The ‘BIG’ Game.