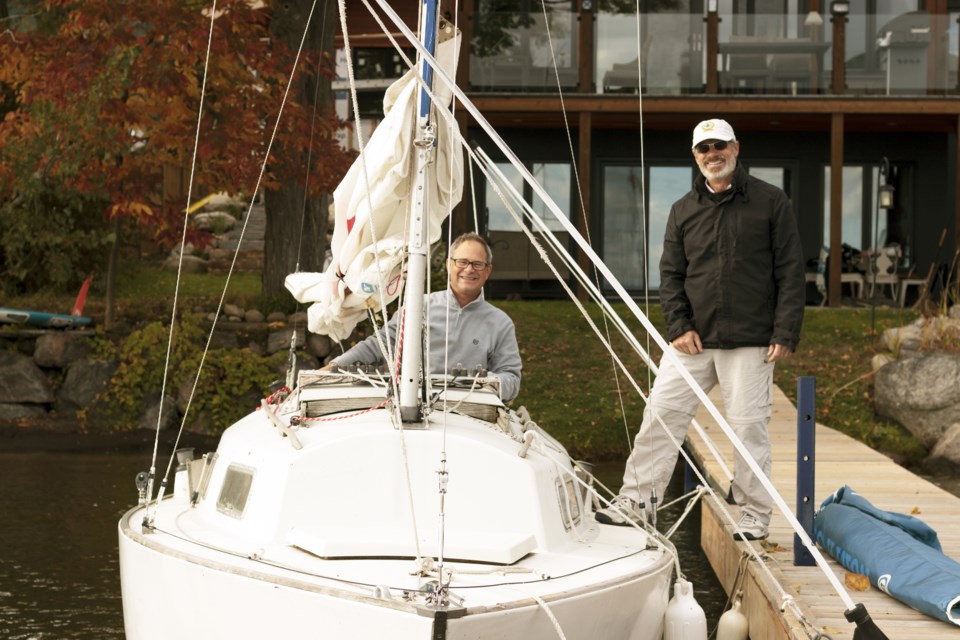 Here on Georgian Bay though, it would probably be met with skepticism, curiosity and a measure of interest… especially since these particular Sharks involve sailors, masts, rudders, and the wind.

Their official name is Shark 24 with the number indicating their 24-foot length.

Avid sailor Jeff Brook has been racing since the age of 12. Now 60, he serves as racing director for the Midland Bay Sailing Club.

“(The club) was started by a group of sailors who were quite into racing back in 1967,” said Brook of the club's recent 50-year anniversary celebration. “Through the years, different types of what we call a ‘one-design’ sailboat have been of interest.”

In 1959, an Austrian-born boat builder named George Hinterhoeller attempted to create a new boat based off the ones he sailed in his youth. It was made of plywood and dubbed the 'Teeter Totter' due to its balance. Refining the design, Hinterhoeller elongated the boat and called it the 'Shark.' Modern builds are made of fibreglass for lighter weight and affordable prices.

This fascination with the Shark 24 caught the eye of local sailing enthusiasts after they noticed the three-person watercraft was gaining popularity in the Toronto and Niagara regions; enough interest that an effort was made roughly 25 years ago to bring the Shark to southern Georgian Bay.

"So over time, there have been between five to 15 different people who have Sharks, who then often will race against each other," Brooks explained. "We’re racing against each other boat-for-boat weekly all season, but at the end of the year we have the regatta where it’s a full day of multiple races.”

Unfortunately, the presence of COVID-19 prompted the Canadian Shark Class Association’s ruling body to shut down all further race activities for 2020.

However, the Midland Bay Sailing Club has allowed casual sailors to enjoy the open waters of Midland bay.

“Generally speaking,” said Jeff Young, Brook's friend and crewmate, “we meet out on the water— there’s a red buoy out there and everybody is in their own bubble on their own boats. So there’s no contact with other people on the other boats. We have a committee boat out there that drops buoys, and we race around them and then return, so we’re not out of our bubble.”

Brook mused, “One of the key things that always rings true, whether there be a race or just going out for fun, is that every time you go out on a sailboat, it’s different. You’ve got to figure out what the wind is doing, or in deciding where to go. Every experience is different.”
Sharks of this nature are welcome to the area, and crowds are encouraged to watch the local waters for their playfully-harmless activities.

But besides racing, the local sailing club sponsors youth interested in becoming involved in sailing. It also holds various community fundraisers, including the annual Sail For Hope that raised close to $6,000 last year for the Canadian Cancer Society.