Championship wrestler inspires the next generation 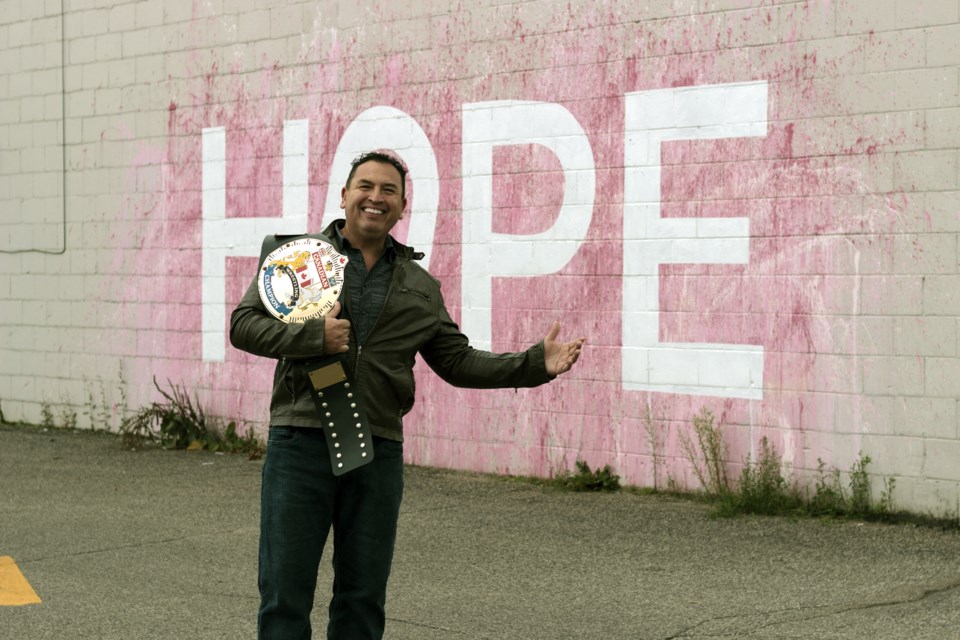 Steve Kirdeikis, a.k.a.'Jack Damage,' stands proud with his pro wrestling Championship Belt in front of the HOPE mural in downtown Midland, himself a beacon for positive inspiration within his community. Derek Howard photo

There’s an old saying: A hero is only as good as his or her villain.

Heroes inspire the people, but villains can rile those same people into emotionally-charged states of being.

Beausoleil First Nation (Chimnissing) resident Steve Kirdeikis knows all too well the roles that villains and heroes play in society.

A 12-time heavyweight champion and two-time tag-team champion known in the ring as Jack Damage, Kirdeikis has portrayed both the 'face' (good guy) and 'heel' (bad guy) in his decades of professional wrestling.

“I started out as a face because I had this smile,” Kirdeikis explained, “so people connected with my smile and being friendly. But then as I got better, (management) turned me more into a heel… the heel controls how the match goes. I liked it a lot more actually because you’re able to focus on the crowd. It was always the heel’s job to get the crowd hating them first.

“As soon as you got out there, you became a character and got the crowd hating you. Whether you got on the microphone and ran the town down or the people down, they’d have no choice but to cheer the next person coming out and that’s going to be the face. So it’s a more important job for a heel.”
On the cusp of turning 50 this month, Kirdeikis had to retrain in order to get back into ring shape.

“I wrestled for six years,” said Kirdeikis of his legacy, “then I stopped — had kids and a family — and I returned to wrestling 16 years later because my kids hadn’t seen me wrestle live before.”

When Jack Damage isn’t body-slamming people through wrestling rings, an action which landed him on the courtroom television show Judge Joe Brown incidentally, he returns to being Steve Kirdeikis, a Grade 4/5 teacher at Christian Island Elementary School.

Kirdeikis fondly recalls his own favourite teacher as a student at Midland Secondary School where he enjoyed playing sports.

"His name’s Jeff Attwood and he was always an inspiration for my athletics growing up," he says. "I always looked up to him, and in some ways followed in his path. I think a lot of his character and good qualities rubbed off on me; he was definitely a good role model for me.

“He was an inspiration to me, definitely a part of what I became athletically and also in my career."

Beyond his strong build and amiable charm, Kirdeikis’ contributions to the region where he was born and raised is an additional component of his personality.

“One of the things I always like to do is give back to the community, especially in Midland where I grew up. A lot of people supported what I did, whether it was the newspapers covering what I was doing or just the fans in general coming out to the shows.

“So I worked with Community Living Huronia— I remember they were having a get-together down in Little Lake Park. I brought my wrestling outfit and I put it on and went down there. I brought a bunch of pictures for me to autograph for them. It was such a great experience. They took a few pictures and they sent them to me. It was nice to give back in that way.”

Over the years, Kirdeikis has been involved with Rock Solid Wrestling, which frequently pairs wrestling events with fundraising shows in various regions.
“They’ll sell a show for whatever it’s going to cost and then any profits that we make go to the charity that we’re supporting,” said Kirdeikis, citing Big Brothers as just one of the many outlets his efforts have contributed toward helping.

When asked what qualifications a person would need to enter into the world of pro-wrestling, Kirdeikis cited athletic prowess, a measure of showmanship, strong charisma, dedication to effort and love and passion for the sport.

“How you look and how you perform goes hand-in-hand, because you need to look the part. In pro-wrestling when the kids are watching, especially, they seem to look up to those people, whether they’re heroes or just someone they look up to. And you need to be that person,” he emphasised.
It’s a feeling Kirdeikis knows quite well.

“There’s a guy in Toronto. His name is Channing Decker, he’s one of these up-and-coming guys; good build, doing things right. The first show I came back on, he was on the show, and he remembered who I was because he and his brother were in the Midland-area when they were young kids. And I guess their aunt took them to the show, which was one of my last matches,” Kirdeikis said with a laugh.

“And he remembered me and that’s what got him into wrestling, seeing that show was one of his inspirations. For him to come up and tell me that was pretty cool.”

And not all heroes wear capes and neither do all villains.

Some are just content to entertain in gimmicked costumes and give crowds a reason to cheer, and a reason to smile.