Huronia Hand Gun Club, which was founded 60 years ago, enters tournaments, gives back through charities
Nov 20, 2020 9:54 AM By: Derek Howard 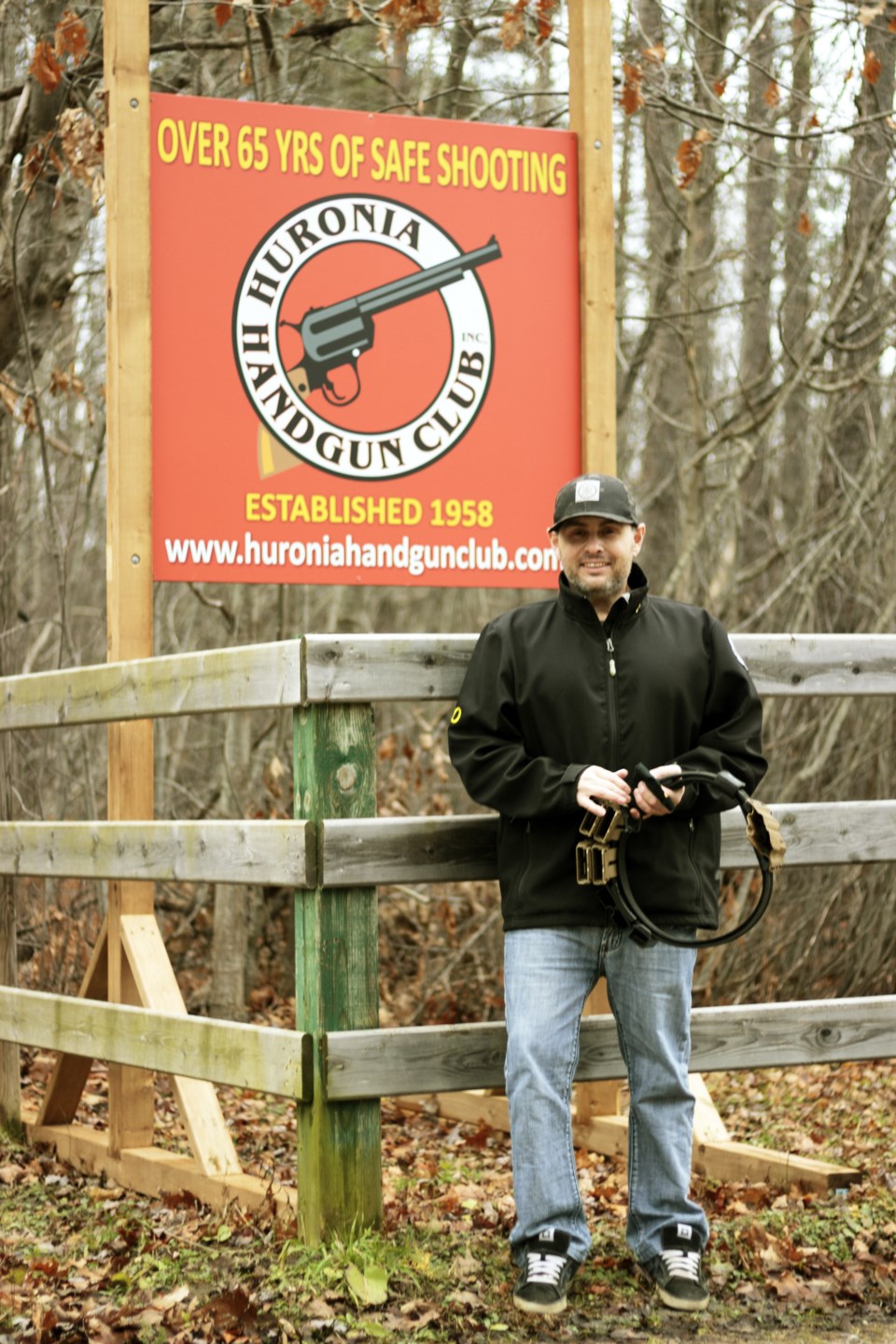 Sheldon East, vice president of the Huronia Hand Gun Club, stands outside the entrance at 1145 Pine Grove Road in Penetanguishene. In his hands is a rig, which is a Velcro belt used by the club in competitions to hold a holster, with additional pouches for magazines and other essentials.

There’s a certain romantic quality within our society that glorifies firearms, whether it’s watching good guys battle bad guys on the big screen, virtually doing the same ourselves with a mouse and keyboard in our homes, or actually being out in the forest for some paintball with other warriors.

However, the difference between romanticized firearms ends there, even as the enjoyment of the sport continues—  treated with a reverence, respect, devotion, care, and safety which isn’t commonplace within society’s preconceptions.
“It’s funny, I’ve been a heavy-duty paintballer ever since I was a kid, and (responsibly using firearms) is actually quite the opposite,” says Sheldon East, vice president of the Huronia Hand Gun Club (HHGC).

“A paintball gun, you’re trained to actually point it at somebody. Something like that can create a really bad habit.
“You would never ever sweep anybody with a firearm. We’ve had paintballers coming into the shooting sports and it is really quite the thing that you have to watch out for.”
East, 43, grew up learning about firearm safety at an early age from his stepfather, who is a firearms instructor. Upon joining the Huronia Hand Gun Club over a decade ago, the safety of firearms training was reinforced through the club’s motto: Keep it safe and simple.
“Our club offers something that’s different than most other clubs,” says East. “We offer training.”

New HHGC applicants need to complete months of probation as well as one-on-one shooting and safety training with instructors “so that we feel comfortable before you even become a prospective member of our club with your firearm.”
Located on 1145 Pine Grove Road at the eastern side of Penetanguishene, the club was established in 1958 by a group of local residents, some of whom were members of the municipal and provincial police departments. The HHGC also covers air gun and archery usage, and prides itself in celebrating 60 years of safe shooting.

“Look down at the States, where people are thrown into a club without any knowledge of a firearm whatsoever. That could promote bad habits, and could make somebody fearful of potentially shooting and enjoying a firearm.”
East relates a story of a couple who attended a firearms club in the United States recently. They found themselves in a situation with firearms they were unfamiliar using and the negative impact it had upon their return to the HHGC.

“When they came to me, it took me about three days straight to fix it, because I had to restart everything from brand new, start them nice and slow, and have them confident (again)," he said. "Our club is focused on safety and really getting to know your firearm.
“So the first year is about the training and getting comfortable; after that, the yearly dues drop considerably.”

East has participated and won in several continental tournaments involved with the International Defensive Pistol Association and the International Practical Shooting Confederation of Canada (IPSC Canada), which is the governing body for dynamic shooting.
“(Through the HHGC), we promote matches which allow shooters across Canada to come shoot with us. The nice thing about IPSC is that, for our match (in August of 2020), it generated $500 for the Georgian Bay Cancer Support Centre.”

There is also a camaraderie and enthusiasm, which reinforces the strong bonds of encouragement within the tight-knit members of the HHGC.

“What I’ve taught all my members,” exclaims East, “is when they go to another gun range and are competing with people we don’t know, we cheer them on. And it’s funny…for years, the sport was kind of hush-hush because it’s essentially a game, right? ‘What’s the best way to angle? What’s the best way to win this game?’
“For years, these sports promoted competition; but what we promote is ‘Let’s cheer each other on, let’s cheer on the guys we don’t know.’ If they have a good stage, we say ‘That was really good.’ When I go to the United States, they’re not like that; they look at me and say ‘You must be Canadian.'"

The Huronia Hand Gun Club’s stringent assurance for strict safety measures, a comfortable environment, passionate members and a competitive skillbase throughout the many years since its inception has made for a local sport that’s definitely worth exploring.