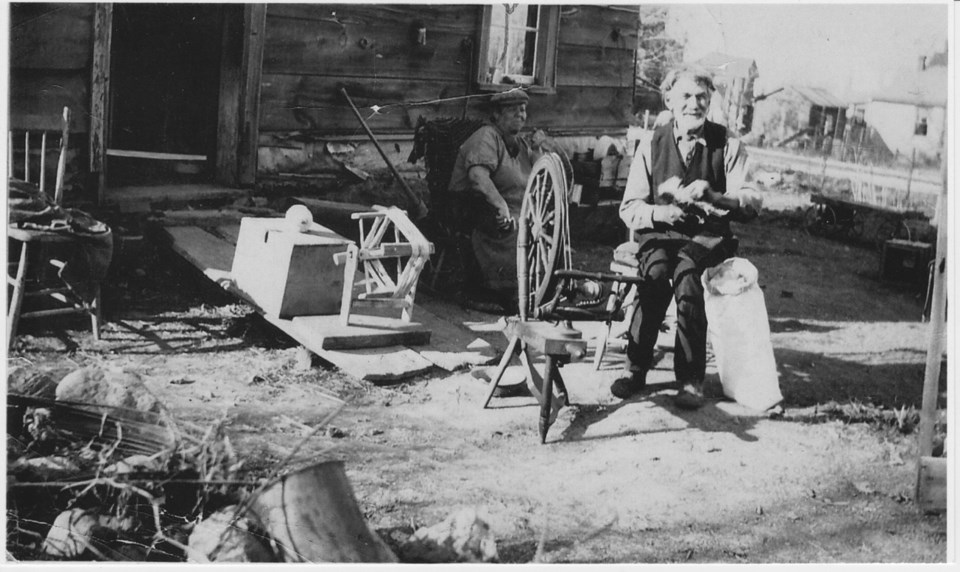 Clevis Hubert, the self-styled "Mayor of Dollartown," is seen in the foreground. Photo courtesy René Hackstetter.

Postcard Memories is a weekly series of historic postcard views and photos submitted by René Hackstetter.

Dollartown,  bounded on the west by Russell, on the south by Elizabeth and  east by William streets had a self-styled “Mayor” in Clevis Hubert.

Cleophus, or Clevis as he was known, was an expert on the spinning wheel, making mats and clothing as well as an accomplished fiddler.

He played at many of the square dances in the district and his nickname was “Freeze Cat Hubert.”

The story goes that he was playing one cold winter night when some practical joker threw a dead cat onto the stage. Apparently, Clevis lifted his bow and said, “Who tro dat dam freeze cat?”

The name stuck and has provided an excuse to retell this story one more time.

When Clevis arrived in Midland after 1862, the hamlet had only a few rough dwellings and two small stores.

Clevis helped cut away the timbers for many of the streets, however, his chief occupation was as a fisherman. He also helped on the construction of the Aberdeen and Tiffin elevators.

Clevis married Elizabeth Valade in the first Catholic Church in Penetanguishene and raised six children. One son, Frank, was killed in action in France in 1917. Clevis lived for many years on the corner of Lindsay Street and Dominion Avenue and died four days after his 105th birthday.

His fiddle was given to his relative Mel Lavigne of the ‘Blue Water Boys.’