Father and son from Coldwater perish in snowmobile tragedy

'The massive amount of messages and tributes is a true testament to how wonderful these two men were,' says wife, mother of victims
Jan 19, 2021 8:14 AM By: Dave Dawson and Andrew Philips 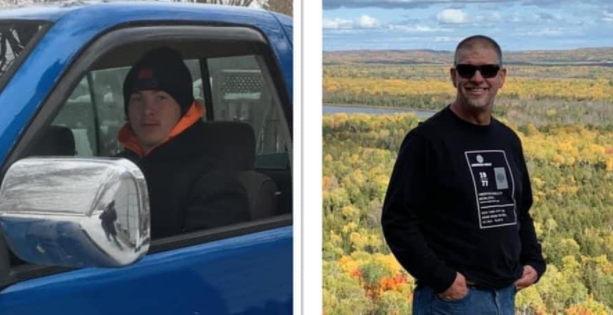 A father and son from Coldwater - Jereld Bremner, 49, and Donny Bremner, 19 - perished after their snowmobiles plunged into open water Sunday.Supplied Photo

The two snowmobilers who died after the sleds they were piloting plunged into the icy water of Georgian Bay have been identified as a father and son from Coldwater.

Police say Jereld Bremner, 49, and his son, Donny Bremner, 19, perished in the tragic incident after they hit open water while snowmobiling Sunday afternoon.

The bodies were recovered by the OPP’s search and rescue dive team Monday at around 11 a.m. in the frigid water off Robins Point Road in Victoria Harbour.

Sarah Bremner, in a Facebook post, said she is devastated by the loss of her husband and son. She called Jereld “the love of (her) life” and said Donny was “forever the life of the party.”

“I can’t say thank you enough for all of the support, kind words and messages that my family has received from everyone in the short time since our loss,” she wrote.

“I’m beyond words. The massive amount of messages and tributes is a true testament to how wonderful these two men were.”

Many friends of the duo shared their grief and sentiments of support on social media channels.

“We lost two good family friends,” wrote Holly DeMoneye. “I grew up with them and it’s hard right now. I’m going to miss them terribly.”

Kirk Wright said both Jereld and Donny had a “huge appetite for life, kindness and love.”

“They leave behind an adoring wife and son (mom and brother to Donny) who no doubt are crushed, but in the loving hugs of family and close friends,” he wrote.

“A measure of this family’s value can be determined from the stream of tears being shed by mine. Rest in peace you guys. Love and sympathy to Sarah and Brandon.”

Robbylee Rusby summed up the sentiments of many about Donny: “He was such a sweet kid. Life is so unfair.”

Brian Butineau, who lives near where the incident occurred, said there is open water in the area.

In fact, a large section of open water could be seen from the shoreline Monday afternoon, not far from where the incident occurred on Sturgeon Bay.

About half a kilometre away on Robins Point Road, a snowmobile trail leading into the bay appeared to be frozen and could create the illusion that the ice was safe for travel.

“It’s completely open right now and the ice moves down the bay,” said Butineau, who lives on Robins Point Road, and gestured toward the area where many sledders begin their journeys onto the bay that's not far from where divers recovered the bodies.

Police had to wait for the coroner to arrive to pronounce death at about 2 p.m.

After the coroner’s arrival, three OPP officers helped move the bodies to a waiting sport-utility vehicle and then cleared the scene.

Butineau said the OPP had numerous personnel on hand to try to rescue the pair, beginning just after supper Sunday and continuing into Monday.

In a release, the OPP again reminded people to be careful when they venture outdoors since ice surfaces may be snow covered and appear safe to travel on.

“Unfortunately, locally we have not had the kind of cold weather required for the formation of ice required for winter activities,” the release said, “so if ice travel is necessary please check with local residents and fish hut operators before heading out on any ice surface- Know Before You GO.”

“Always remember that ‘No Ice Is Safe Ice’ and you need to be aware of current, past weather conditions and recent commercial ice breaking activity along with checking with area residents who have "local knowledge of ice conditions.”