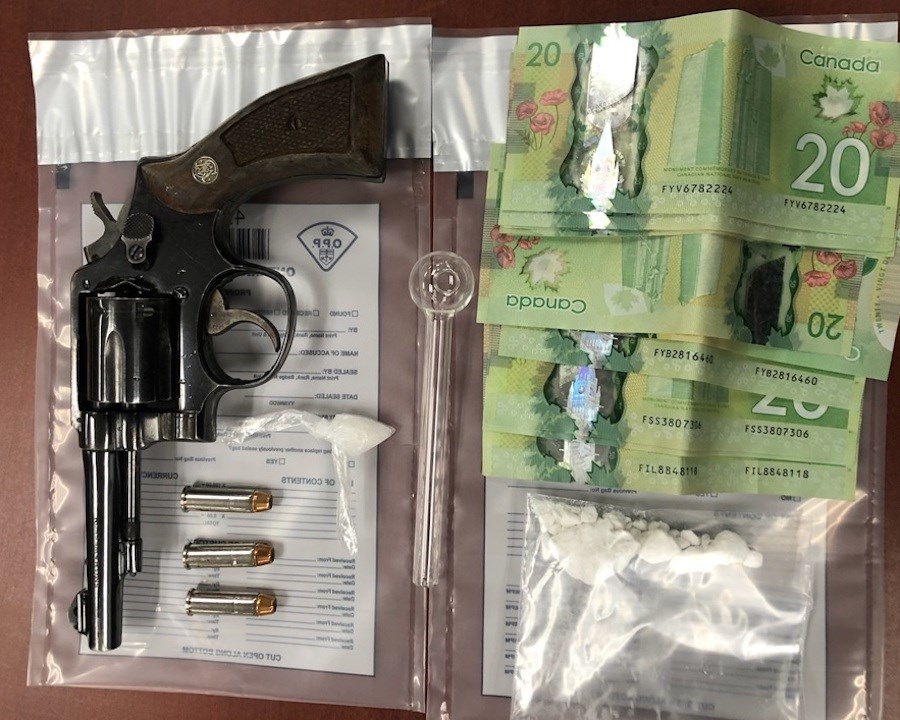 OPP seized a handgun, drugs and cash during an incident in Penetanguishene on Jan. 18, 2021. Image supplied

NEWS RELEASE
ONTARIO PROVINCIAL POLICE
******************************
PENETANGUISHENE - On Jan. 18, 2021 just before 1 a.m., a member of the Ontario Provincial Police (OPP) Southern Georgian Bay Detachment was patrolling in the area of Church Street and Burke Street in the Town of Penetanguishene when he observed a male walking on the sidewalk. The officer recognized the male and was aware that he was bound by an order to reside in Ajax, Ont.

Upon seeing the officer, the male began to run. The officer pursued the male on foot for approximately 100 metres where he became trapped between two houses and a fence, the officer observed the male throw an object from his waistband. After a brief struggle, the male was arrested. During a search of his person a quantity of methamphetamine and cocaine were located, while checking the area where the male discarded the item, police located a loaded revolver handgun.

The accused was held for a bail hearing and is scheduled to appear before the Ontario Court of Justice via video link.

Officers of the OPP values your contribution to building safe communities. If you have information about suspected unlawful activity please contact the OPP at 1-888-310-1122. To report a crime anonymously please visit Crime Stoppers or call 1-800-222-TIPS (8477).