Toronto FC coach Greg Vanney had options when he surveyed his roster for someone to step in as captain for the injured Michael Bradley. Canada's Jonathan Osorio has captained both club and country. Omar Gonzalez has won more than 50 caps for the U.S.
Mar 3, 2020 2:29 PM By: Canadian Press 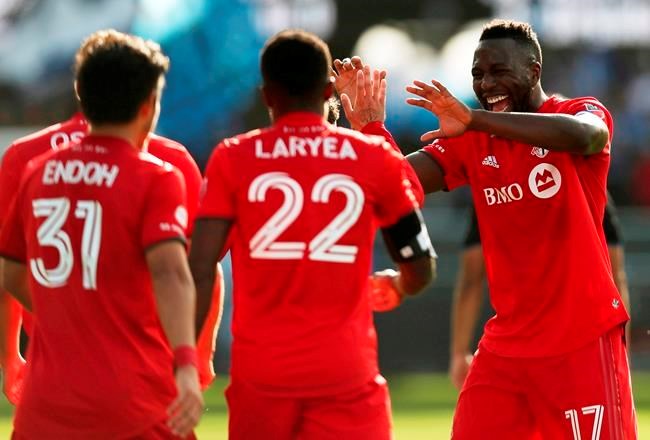 Toronto FC coach Greg Vanney had options when he surveyed his roster for someone to step in as captain for the injured Michael Bradley.

Canada's Jonathan Osorio has captained both club and country. Omar Gonzalez has won more than 50 caps for the U.S. Quentin Westberg and Justin Morrow have already served as TFC skipper.

"One is Jozy's personality," Vanney said. "When he wants to and he's ready and he's in the right position to take ownership of the team, (he) is the most effective of anybody that's available and healthy for us. He has the most influence on the group.

"He has a big personality. When he's giving guys compliments, they feel bigger. When he's working hard on the field, they feel like they can win any game."

The second part is to challenge the big forward.

"He's 30 years old now. He's been around for a long time. He's been successful," said Vanney. "It's also to say 'You're ready for some more responsibility and let's put that on your shoulders and see how you handle it.' He's been great about it. The whole pre-season, he's been there for his teammates and he's been helpful for them. But then he's also held people accountable.

"I think he's found a good way. We want to continue to see that build. If we continue to get him in that frame of mind, week in and week out, day in and day out, then I think he's going to have a good year."

Vanney and other front-office personnel know all about Altidore holding people accountable. The burly forward blasted the club last April, accusing team president Bill Manning of putting his ego ahead of player welfare by banning a valued trainer because of his association with the now-departed Sebastian Giovinco.

Altidore issued an apology days later, after it was announced that trainer Giuseppe Gueli was still going to work with the club.

The star striker ripped into the team again in January, questioning its medical staff after it was announced that Bradley required surgery — weeks after injuring his ankle in the MLS Cup final.

Altidore wears his heart on his sleeve. Usually reluctant to speak about his own performance, he relishes talking up teammates.

That has not gone unnoticed.

"He's got a really good way with people," said Vanney. "When he's on your side and giving you compliments like (to Nigerian rookie Ifunanyachi) Achara, like (17-year-old) Jayden Nelson and these guys, then I know it makes them feel bigger than maybe they are in the moment. And that's good for our team and those guys are confident and feel good."

"And I think he also has a nice way to balance off accountability. Because he can say the nice things, then you can sometimes also say some of the things that need to be critical. He's found a good balance in that and that's part of the responsibility that we want him to take. And he's ready to take it. Now he has to be responsible about it, because it's his role."

Bottom line, in many ways Toronto FC goes as Altidore does.

For his part, Altidore says he is not changing anything.

"And even if I did, nobody would believe me," he said with a smile. "These guys know me. They've known me long enough and they know what I'm all about.

"That in a way makes it easier, because I know I don't have to be anything else but myself. And the guys respect that, they understand me. We all understand what needs to be done. That's the beauty too about something like this — the blueprint's been laid out, the culture in this club is there."

Altidore's US$6.33-million salary last season was third in MLS behind Bradley ($6.5 million) and Zlatan Ibrahimovic ($7.2 million), who has since left the L.A. Galaxy for AC Milan.

Toronto hosts New York City FC on Saturday at BMO Field, after settling for a 2-2 draw in its season opener at San Jose thanks to a 95th-minute free kick on a tough angle from Quakes' Mexican international Oswaldo Alanis.

NYCFC lost 1-0 at Columbus after losing defender Maxime Chanot to a red card in the third minute, equalling the third-fastest ejection in MLS history.

Toronto trained outdoors Tuesday on some variable grass conditions with the temperature at 3 C along with drizzle, against a backdrop of snow around the fields. Saturday's forecast is for a high of 3 C with conditions likely to be cooler for a 5 p.m. kickoff at BMO Field.

There was no update available on the condition of new designated player Pablo Piatti, who has yet to make his Toronto debut because of a hamstring strain.

Jacob Shaffelburg is slated to undergo an MRI after feeling hamstring tightness in San Jose. Fellow midfielder Nick DeLeon is said to be doing better after suffering "some nerves issues" in his lower back.

This report by The Canadian Press was first published March 3, 2020.

Pandemic-proof: Fall college football revived on West Coast
Sep 25, 2020 2:13 AM
Comments
We welcome your feedback and encourage you to share your thoughts. We ask that you be respectful of others and their points of view, refrain from personal attacks and stay on topic. To learn about our commenting policies and how we moderate, please read our Community Guidelines.