OTTAWA — The Winnipeg Jets delivered their most complete effort of the young season on Thursday night, using a balanced attack and steady goaltending for a 4-1 win over the Ottawa Senators.
Jan 21, 2021 10:54 PM By: Canadian Press 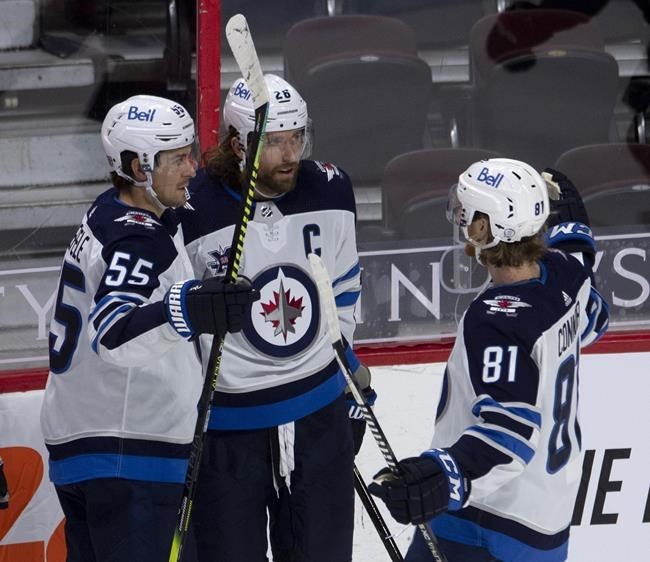 OTTAWA — The Winnipeg Jets delivered their most complete effort of the young season on Thursday night, using a balanced attack and steady goaltending for a 4-1 win over the Ottawa Senators.

"Lots of quickness," said Jets head coach Paul Maurice. "It was a well-managed game and a really well-played game by our team."

Nikolaj Ehlers, Mark Scheifele, Adam Lowry and Blake Wheeler scored as the Jets controlled most of the game.

Ehlers and Scheifele also had an assist apiece. Kyle Connor had two assists.

"Everyone was connected and we moved as a unit," Hellebuyck said. "There was no one slacking. Everyone wanted to play and everyone was in it early."

Ottawa (1-2-1) picked up the pace a bit in the third period after a flat showing over the first 40 minutes. The Senators made too many careless mistakes and Winnipeg made them pay.

The Jets were coming off a 4-3 overtime win over Ottawa on Tuesday night, also at Canadian Tire Centre.

Ehlers opened the scoring at 11:50 with a low wrist shot from the high slot. The puck went between the legs of netminder Matt Murray, who was partially screened.

Ehlers helped make it a 2-0 game early in the second period. He made a pass from the corner to Connor, who directed it to the side of the goal for Scheifele to sweep in at 4:22.

Scheifele took advantage of some lax defending by Thomas Chabot, who was a team-worst minus-3 on the night.

The Jets pulled away with two more goals later in the stanza.

Derek Forbort made a crafty bank pass off the side boards to spring Trevor Lewis, who deked Murray but watched the puck hit the post. Lowry banged it in at 7:05.

An Ottawa timeout did little to stem the momentum.

Moments later, Connor knocked down a poor clearing attempt by Chabot and flipped it to Scheifele for a one-time pass to Wheeler, who made it 4-0 at 13:55.

"They came out with their A-game and we were caught on our heels a little bit," Murray said.

Hellebuyck, meanwhile, was steady when needed. One of his best stops came early in the third period when he stacked the pads to deny Connor Brown on a breakaway.

"He's quite the luxury to have back there," Wheeler said. "We certainly feel he's the top goaltender in the league."

Netminder Marcus Hogberg played the final 20 minutes for Ottawa. Each team had 29 shots on net.

Centre Colin White was back in the lineup after being scratched in two of Ottawa's first three games. Defenceman Ville Heinola made his season debut for Winnipeg.

Ottawa rookie Tim Stutzle and Winnipeg sniper Patrik Laine were out with injuries.

Winnipeg centre Nate Thompson suffered a lower-body injury in the game and is day to day, Maurice said.

The teams will face off again Saturday at Bell MTS Place. It will be the opener of a seven-game road trip for the Senators.

This report by The Canadian Press was first published Jan. 21, 2021.