Canadian defender Vanessa Gilles was late coming to soccer. "I used to play tennis … with mini-skirts and what-have-you," she said with a laugh. "I was very much into the tennis scene. "(But) mentally it wasn't for me.
Jun 10, 2021 4:41 PM By: Canadian Press 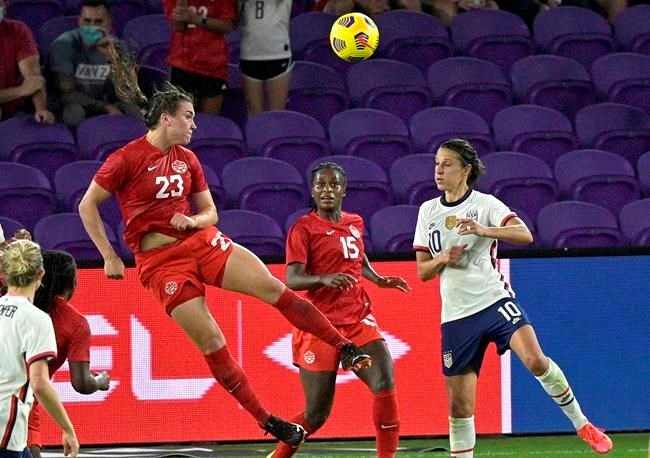 "I used to play tennis … with mini-skirts and what-have-you," she said with a laugh. "I was very much into the tennis scene.

"(But) mentally it wasn't for me. There wasn't enough physical contact. So I quit at 15 and (at) 16 I joined my high school soccer team, actually as a 'keeper. Also didn't have the mentality for that, so made my way one (position) up since all I could do was head a ball. And (I've) stuck there ever since."

Today the 25-year-old from Ottawa is an accomplished centre back who plies her trade in France with FC Girondins de Bordeaux. And despite having just five caps under her belt, she has made a strong case to join established centre backs Kadeisha Buchanan (101 caps) and Shelina Zadorsky (71 caps) at the Tokyo Olympics.

She has proved to be a force in the air and able to react quickly when things go awry.

Gilles is one of 29 players in camp in Spain where eighth-ranked Canada takes on the 27th-ranked Czech Republic on Friday before facing No. 7 Brazil on Monday. Both matches are at Estadio Cartagonova in Cartagena, Spain.

They are the last matches before coach Bev Priestman announces her 18-woman Olympic roster — and four alternates. Priestman will then hold one more camp ahead of the Games.

Canada opens the Olympic football tournament July 21 against host Japan, ranked 11th in the world, before facing No. 37 Chile on July 24 and Britain on July 27. FIFA does not rank Britain, which draws on players from No. 6 England, No. 23 Scotland, No. 32 Wales and No. 48 Northern Ireland.

In just her third national team appearance, Gilles was a defensive force in Canada's 1-0 loss to the top-ranked U.S. at the SheBelieves Cup in February, with Buchanan back in France with her club side Lyon.

Thanks to some good friends back home, Gilles said she came out of the U.S. game with some 200 messages on her phone.

"Every tweet that they could send me. So that was pretty cool," she said.

Gilles impressed again in April wins over Wales and England, again filling in for Buchanan who was absent for medical reasons.

Gilles says Buchanan is one of the reasons she started playing soccer "which is crazy because she's only a year older than me."

"The nice thing about playing, whether it be with Shelina or Kadeisha or watching their partnership, is that all three of us kind of have a different playing style. And all three of us can take parts of our game from each other," said Gilles. "What's been nice for me is I've been able to learn a whole lot from Shelina and a whole lot from Kadeisha in the short amount of time we've had, which has helped me obviously at club (level) and with Canada."

"They've been super-helpful," she added.

Canada has never played the Czech Republic at the international "A'' level.

The Canadian women are 8-9-7 all-time against the Brazilians, a record that includes a 2-1 Canada win in the bronze medal match at the 2016 Rio Olympics.

Canada lost 2-0 to Brazil last time out at the SheBelieves Cup.

Gilles starred at the University of Cincinnati, starting all 82 games she played there from 2014 to '17. She was named the American Athletic Conference Co-Defensive Player of the Year and a first-team all-conference selection in 2017.

She led a senior class that recorded 40 career shutouts, the most of any senior class in school history. After her Bearcats career, she joined Apollon Ladies FC in Cyprus before signing in France.

Off the field, Gilles spoke at the United Nations in New York City in March 2019 as part of the UN-Women's 63rd Session of the Commission on the Status of Women. Gilles was in the U.S. with her French club side for scrimmages in New York and Washington, D.C.

Her club selected her to speak "because of my experiences and journey in soccer, which is somewhat different than the norm," Gilles said following her speech.

This report by The Canadian Press was first published June 10, 2021.