Only 20 lots can be made available for development in the near future in the Grandview Beach and Paradise Point area
May 12, 2021 9:54 AM By: Mehreen Shahid 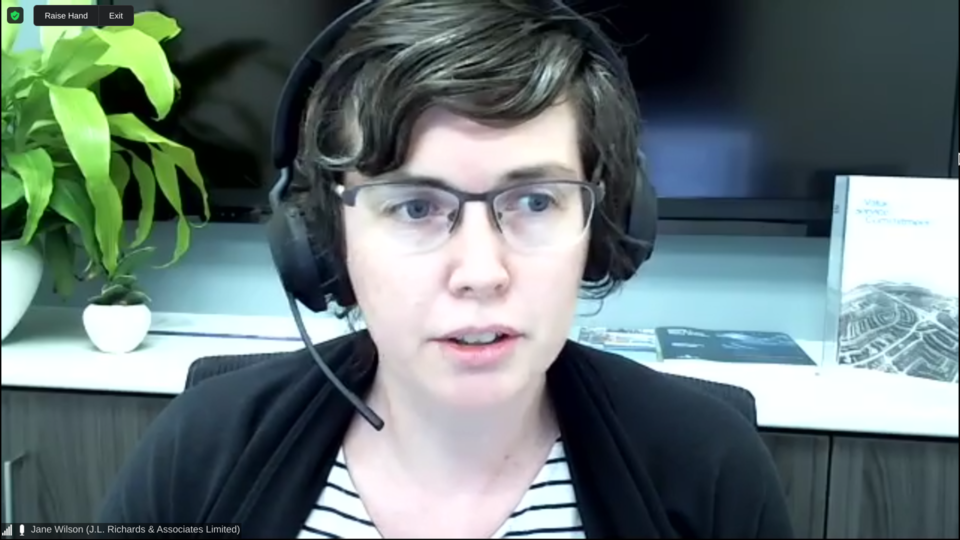 Jane Wilson, environmental engineer with the township’s consultants, J. L. Richards and Associates, stripped back the layers of the hydrogeological situation in Victoria Harbour.Mehreen Shahid/MidlandToday

Tay will be approaching the lifting of holding provisions on vacant plots in Grandview Beach and Paradise Point with a precise strategy.

The reason for treading cautiously lies in the area’s water and wastewater capacity.

As Jane Wilson, environmental engineer with the township’s consultants, JL Richards and Associates, explained, the challenges began in the mid-’70s when development restrictions were put in place due to concerns raised by the health unit and Severn Sound Environmental Association around groundwater quality in the area.

Since then two Class Environment Assessments have been conducted, she said, one in 2002 and another in 2015.

A nitrate septic impact assessment showed that with the current number of septic systems in the community, the theoretical nitrate impact is 15 to 18 mg/L higher than what the Ministry of Environment and Climate Change (MOECC) subscribes, she said, adding that was why a later monitoring assessment using wells was done.

That exercise showed that groundwater quality in both the shallow and deep aquifers is poor, but especially so in the lower limestone aquifer, said Wilson.

Keeping that in mind, staff in the planning department will initiate next steps by bringing forward in a staff report summarizing some options for council to consider around lifting the holding provisions on the 20 lot capacity available, said Steve Farquharson, general manager, protective and development services manager of planning and development services.

“We can't lift the holding permission on all lots, because as soon as we do that, everyone will be coming for building permits,” he said. “We have to go about it strategically. Last thing we want is to lift the holding provisions and not have that person build.”

Coun. Paul Raymond asked if the testing pipes would remain in the area as a permanent fixture?

Wilson said that would be the recommendation to continued data collection for monitoring down the road.

Coun. Jeff Bumstead asked if the study factored in the impact of seasonal residents.

“Most of our monitoring was done in summer, so presumably you would have had full occupancy at that time,” he added. “That should represent the worst-case scenario. We're capturing water that's fairly old and has travelled a fair bit of distance. Continued monitoring would be able to tell whether concentrations are increasing or not.”

“And how do we prevent cross-connection to the house?” he said.

Terry Tompkins, chief building officer, said that could be done by using backflow preventers on the line and the house line.

“If someone is going to keep their well, we usually talk them into using it just for outside and use municipal water for consumption,” he added.

Coun. Barry Norris was concerned about the nitrate levels.

“It doesn't meet the MOECC guidelines for nitrate levels, what I didn't see is your company telling us what the groundwater (nitrate level) is,” he said. “You have addressed that fact that there is no infiltration from septics into wells. There's 25 to 28 mg/L of nitrate, is that still present?”

MacIntyre said the original calculation is based on a very simplistic procedure.

“It only takes one mechanism into consideration,” he said. “What we've found and seen in research in other journal articles is that there are other mechanisms where you have ion exchange that can reduce nitrate concentration. Theoretically, you should have a 28 mg/L problem, but in reality you have mechanisms that are cleaning the water before it reaches the lake.”

At the monitoring wells, MacIntyre said, the concentration levels of nitrates are even lower --- barely above lab detection levels.

He also explained that the nutrients are going into the ground, but as they travel, they're being picked up by various ion exchanges and broken down by bacteria before they move very far.

“We have these wells down gradient so as groundwater travels toward those wells,” added MacIntyre. “It carries the nutrients from the septic beds and we would be able to detect that at the wells. What we're seeing is that those concentrations are much lower than the reasonable use criteria.”

The shallow groundwater itself is going to carry nutrients no matter what, he said.

“They could be from lawn fertilizers as well,” said MacIntyre. “The contamination in the deeper groundwater has more to do with mineralization, so we have flourides and chlorides that make the water caustic and could cause health effects in the deeper aquifer systems.”

Norris asked why the township wouldn’t be able to release all 80 lots for development.

“I see no advantage to a few at a time,” he said. “I think that's more to do with the planning issue down the road.”

MacIntyre said even the 20 lots would cause a measurable effect at one of the monitoring wells if the scientific assumptions are wrong.

“That's why we want to be careful with how you release these lots,” he added.

Staff will bring back a report for council’s consideration at a future committee meeting.