We shouldn't diminish the importance of a diverse council by putting a price tag on two councillor positions, says councillor
Sep 17, 2020 9:11 AM By: Mehreen Shahid 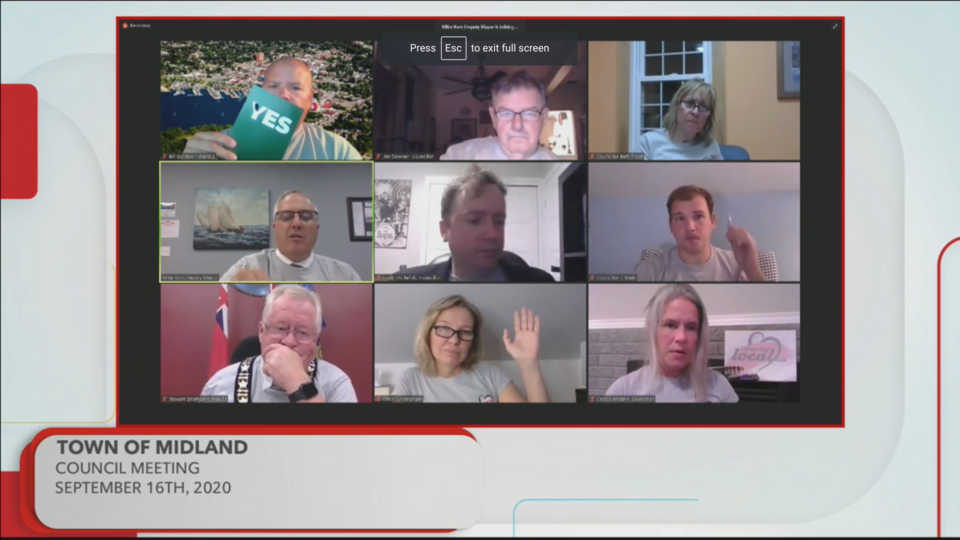 Council decided Wednesday to eliminate boundary system but stick with the current council composition, which may be subject to change after the public consultation process. Mehreen Shahid/MidlandToday

Midland council will not be slimming down in number, but will eliminate the ward system for 2022's municipal election.

The full staff recommendation of moving to an at-large system with a mayor, deputy mayor and five councillors, fostered a lengthy discussion at last night's meeting.

"I'm going to be supporting the staff recommendation," began Coun. Bill Gordon, adding he conducted his own public consultation online to bring public opinion to the meeting.

There seems to be some appetite for reducing the overhead, he added.

"People support elimination of the ward system and a reduction in council size," said Gordon. "I'm hoping they understand that there's an impact to their democracy, their voices and they're representation by doing this. It does allows for special interest groups and pockets of wealthy areas to seize control of council. That's a very real reality that's harder to pull off in a ward system and with more councillors."

Although he started out by saying he would support the staff recommendation, he changed his mind later on as his colleagues presented their arguments.

"I will speak in favour of at-large," said Mayor Stewart Strathearn. "There have been several attributes suggested for the ward system. That there's a voice for every ward. When I campaigned as a councillor, I campaigned at-large and was constantly asked 'why can't I vote for who I think is going to do the best job?'"

He then talked about the perceived negatives of the at-large system.

"It's said it favours interest groups that can favour council," said Strathearn. "Councillors on county who have at-large (said) they find it works very well. I asked if it excludes people? They said they don't think so. Do they have special interest groups that have risen above everybody else? They're not seeing it."

He said he had seen it happen in other municipalities, but it seems to run its course making council representative of the entire population.

As well, he noted, the neighbouring town has moved to reduce council from nine to seven members.

"The mayor (of Penetang) felt it was a workable number and it wasn't that much more onerous in terms of committee work," said Strathearn. "I happen to agree with that."

He then addressed Gordon's question about what would happen to Midland's representation on county council if the deputy mayor position were to be eliminated.

"County is structured as mayor, deputy mayor and an alternate and that's how their process works," said Strathearn. "It was discussed last Tuesday and it was decided it would stay that way."

"If the system was geared that at council meetings only ward 1 councillors voted on Ward 1 issues, it would make sense to have a ward system," said Oschefski. "But it doesn't work like that at all. We all get voted in and we all vote on all the issues across the town."

Where most councillors were in favour of eliminating the at-large system, they weren't in favour of reducing council size from nine members, even if there were some savings.

Clerk Karen Desroches explained there would be cost savings of up to $70,000 with the reduction of deputy mayor and a councillor, or $54,000 with two council members gone.

"If council was to reduce the council to five members, and the position of deputy mayor and three councillors were eliminated, it would result in $138,000, and if it were four council members positions eliminated, the cost savings would be $108,000 approximately," she said.

Coun. Jon Main said he wasn't in favour of changing the council size just to save money.

"I would speak in favour of keeping council at nine," he said. "I just think it's so important because we have a participatory democarcy. Keeping it at nine, we have a wide range of councillors, different professions, ages, ethnicity and diversity. We're not just policy makers we're much more than that. We shouldn't diminish that just by putting a price tag on two councillor positions."

Coun. Jim Downer used his vast experience, which included time as mayor, to make the case for nine council members.

Coun. Beth Prost concurred: "I'd like to see the number stay at nine. I think the town needs diversity on council. All committees and things I know that all of us do, I don't know how you would do it with seven."

"For the amount of money that we're making, we're making way below minimum wage," she said. "We don't get into this to get rich. We're advocating for the people and we're trying to do our best. What is also potentially removed at different voices and different opinions. This is a good number. As an area that's slated to grow, getting rid of councillors isn't the way to go."

Staff will now provide notice and hold a public consultation session prior to the passing of the final bylaw.