‘I don’t like being associated with the name Vanier,’ community reacts to trustee vote 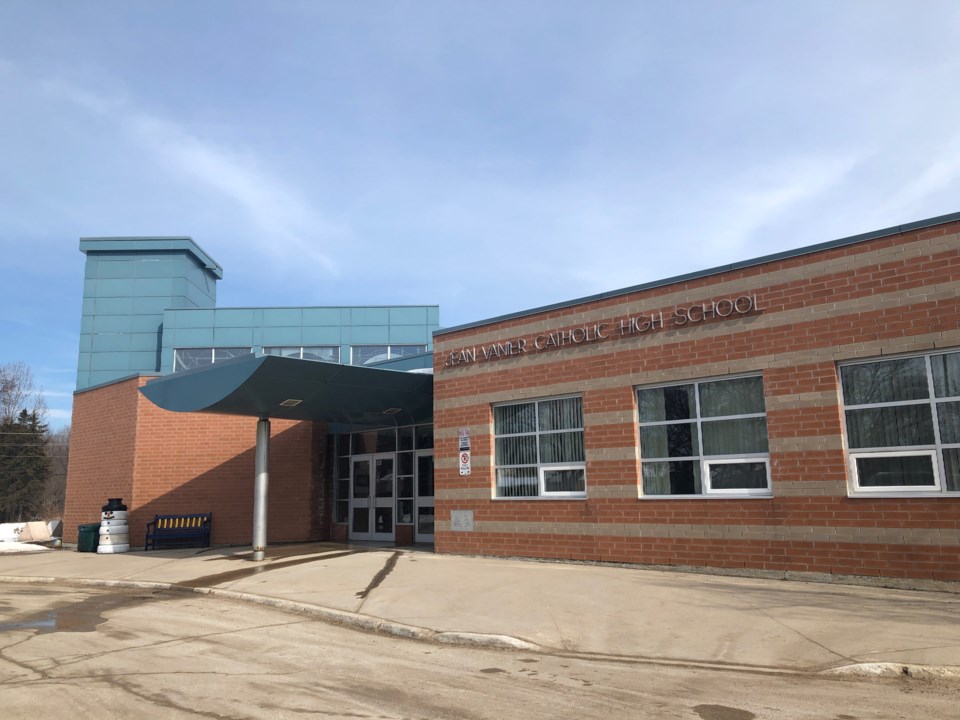 A student at Collingwood’s Jean Vanier Catholic High School is reeling from the choice of the local school board to turn down a new school name that had already won support from students, teachers, and parents.

The proposed name – Our Lady of the Bay Catholic School – was turned down by the Simcoe Muskoka Catholic District School Board (SMCDSB) trustees during their meeting at the end of April at a vote of 4-4.

Rachelle Paczesny, a Grade 11 student at the Catholic high school, served on both the school naming committee and the oversight committee to determine the name and was also slated to speak in a delegation to trustees on May 13 to reconsider their choice. The meeting ended abruptly due to a procedural issue, so she didn’t get a chance to speak.

“It’s disheartening to know we still don’t have a school name. We’ve been at this for months now. We can’t move forward. I don’t like being associated with the name Vanier,” said Paczesny.

“We’ve always been told we have this great voice as students and they will listen to us, but then when put into this position where some of us did stand up for something, it was so easily diminished by people of power,” said Paczesny. “That was really hard for me to grasp. We were told when we grow up, we can do whatever we want. We’re growing up. We were ignited and they just kind of put our fire out.”

Back in February, the SMCDSB made the decision to change the name of Collingwood’s Catholic high school after allegations of sexual abuse surfaced against the school’s namesake.

“There were originally 38 names and we had narrowed it down to three. We had spent so long doing that until we finally got that one name. And then, it was just taken away. It was really sad for all of us,” said Paczesny.

Paczesny, along with Vanier teacher Jennifer Foster, were slated to make a 15-minute deputation to the trustees on May 13.

“In my speech, I was planning to talk about how we’re all really feeling about this. Especially during this pandemic, we don’t have an identity,” said Paczesny. “It’s hard to stay positive and have school spirit.”

After the name was passed on the first time in April, Paczesny says she contacted all eight trustees to ask about the decision.

She says she heard back from four of them. Local trustee Peter Fracassi did not contact her back.

Fracassi has also not returned a request for comment on this issue from CollingwoodToday.

The school board declined to comment on the tie vote that defeated the new name. To read our story on that, click here.

Within the school community, Paczesny said students are all coping in their own ways.

“Some of my friends especially were very upset about it. Other people were angry and confused. It kind of just broke down the whole school’s morale,” she said. “We looked up to this person who we thought was a great man.”

Paczesny said she has not seen concrete reasoning why the name was turned down.

Penny Rush was one of many parents who filled out the survey to help choose a new name for the school.

Rush’s son is currently in Grade 10 at Jean Vanier. Her other son will start attending the school in the fall.

“I have a 16-year-old and that’s a very questioning time. To have conversations and ask him to continue to keep that faith in light of allegations such as this... it’s difficult,” she said. “There’s a lot of trauma from all of this in the community.”

“Overall, there was really a sense of disappointment and maybe betrayal in a sense. (Vanier was) a figure that was celebrated and admired not just even in Catholic circles. He did phenomenal work in his life,” she added.

Rush points out that the school board’s initial response was very supportive of students. Students were allowed to forgo their uniforms and an online portal was set up where students could voice their questions or make suggestions for renaming of the school.

However, since the board defeated the new name, she said the process has lost transparency.

“For me, right now, it’s not about the name. It’s about the process. All we’re asking, as members of the Jean Vanier community, is the same consideration and respect that’s been shown to every other school in the [district]. The process for naming schools is and continues to be that it’s done through a committee with community consultations, and then taken to the trustees,” said Rush.

“In my opinion, they haven’t done their job. I would have expected to see more empathy from our trustees,” said Rush. “I know we have some champions within the trustees, but the sense I get is it’s a bit of a fractured group.”

Rush expressed frustration with the lack of access to trustees as a result of the pandemic.

While students, teachers, parents and the community are now left in limbo concerning next steps, Rush says she still has to drive by the school, with Vanier’s name emblazoned on the side of the building, every time she leaves her house.

“It makes my stomach turn every time I drive by. It has to come down. We have to move on,” said Rush. “There’s also a sense of betrayal not only by Jean Vanier, but also our trustees, because it feels like they’re throwing salt in an open wound. This only served to fracture our community and students more.”

Rush said some parents of Jean Vanier students are organizing to try to get their voices heard, at first by writing letters to school board trustees. If you’re interested in participating, email Rush at penny.rush@icloud.com.

Paczesny is also encouraging fellow students to write to the trustees. If you’re a student and would like to contact Paczesny for help with writing a letter, email 20754@smcdsb.on.ca.

“Maybe they’ll see that enough of us have an opinion on this, then maybe they’ll understand where we’re coming from,” said Paczesny.

Applications for public board's French Immersion program open next week
Nov 26, 2020 5:58 PM
Comments
We welcome your feedback and encourage you to share your thoughts. We ask that you be respectful of others and their points of view, refrain from personal attacks and stay on topic. To learn about our commenting policies and how we moderate, please read our Community Guidelines.