The agency would like to start constructing multi-unit buildings next, CEO says
Oct 22, 2020 7:29 AM By: Andrew Philips 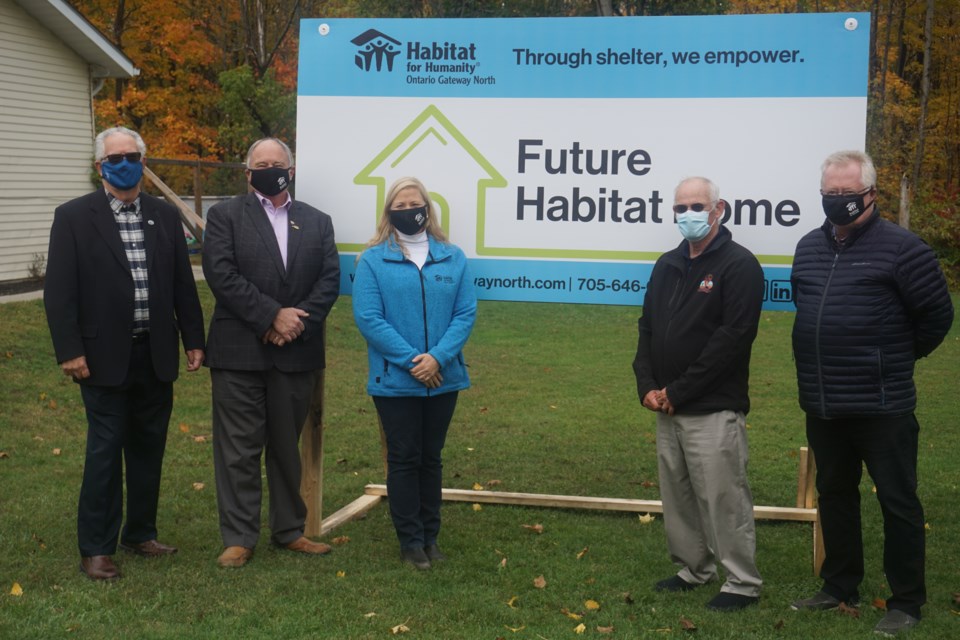 Habitat of Humanity’s build next spring in Midland might be the last of its kind for a while.

Kimberley Woodcock, CEO for Habitat for Humanity Ontario Gateway North, said the non-profit would like to start constructing multi-unit buildings that can house more families than its traditional single-family offerings.

“We want to look at larger parcels of land that can serve more people” Woodcock said during an official event Wednesday to unveil how the upcoming Birchwood Drive semi-detached home in Midland will look once completed next year.

“Habitat is known for building one home at a time. The next offering in North Simcoe, we're aiming to make it multi-residential. We have very good partnerships at the municipal level and at the County of Simcoe.”

As for the new Midland build, the plan involves constructing a semi-detached home at 808 Birchwood Drive that will add two affordable, universally-accessible homes to the Midland supply while serving two families coping with mobility challenges.

The Town of Midland donated the land to the North Simcoe Chapter of Habitat for Humanity in 2016.

Woodcock, who pointed out that this property represents the last in its “land bank” inventory in North Simcoe for traditional home ownership, said the new homes will feature the latest in energy efficiency with an updated design that also makes it fully accessible.

“We believe in the benefits to a family in the cost of operating a home once we build that way,” Woodcock said, noting there’s also a huge need for age-friendly housing in the area.

“We don't require a down payment, but it is important to note that mortgage payments are a part of the model,” she said. “We get a lot of applications from people who are not working and we aren't able to approve those.”

“Our budget is $400,000,” Woodcock said, noting the agency also accepts gifts-in-kind from area businesses interested in helping out.

Midland Mayor Stewart Strathearn said the need for affordable housing is very real throughout the region.

“The rental inventory is virtually non-existent,” Strathearn said. “They’re getting 80 applications now for one vacancy.”

Acording to Habitat’s regional chapter, the need for affordable housing in North Simcoe is undeniable with more than 52% of tenant households forced to spend close to a third of their household income on accommodation. Coupled with a rapidly aging demographic, the limited supply of affordable, accessible housing keeps vulnerable people in Midland at risk.

Established in 2000, the North Simcoe Chapter of Habitat for Humanity is entirely volunteer driven. To date, the chapter has successfully completed six homes in Midland, Penetanguishene, and Tay Township.

Tiny Township Mayor George Cornell said he would like to see it build something in his municipality next.

“Tiny’s the only one without a Habitat for Humanity project,” Cornell said, adding the township would welcome the opportunity to build a new multi-unit building.

For more information and to find out ways to help, email info@habitatgatewaynorth.com.

Numbers remain high as province reports 1,822 new COVID cases
Nov 28, 2020 10:36 AM
Comments
We welcome your feedback and encourage you to share your thoughts. We ask that you be respectful of others and their points of view, refrain from personal attacks and stay on topic. To learn about our commenting policies and how we moderate, please read our Community Guidelines.