Group gets cash, OK from council to combat phragmites at Tiny Marsh

'I think this is a great opportunity for us to get involved with,' says Tiny Township's director of public works
Mar 2, 2021 10:53 AM By: Mehreen Shahid 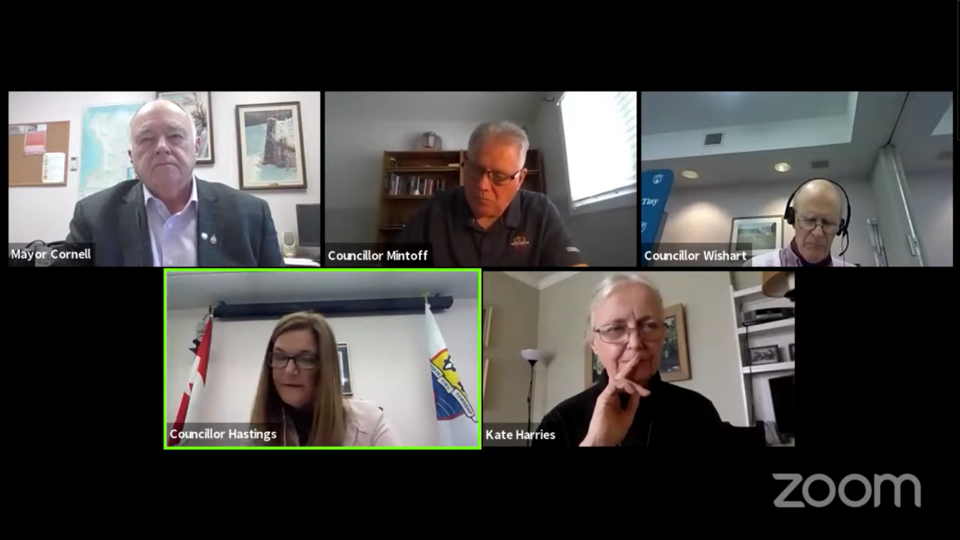 Kate Harries (bottom right), president of MTM Conservation Association, was successful in attaining $3,000 in funding for a phragmites removal program that aims to target the invasive species in Tiny Marsh.Mehreen Shahid/MidlandToday

A local conservation group is aiming to get phragmites at Tiny Marsh.

The invasive species is spreading and crowding out native vegetation that is at the centre of the food web supporting the biodiversity at the marsh, said Kate Harries, president of MTM Conservation Association (MTM).

The MTM is a volunteer board responsible under contract of the Ministry of Natural Resources and Forestry for managing crown land at Marl Lake, Tiny Marsh, and Matchedash Bay, she explained to Tiny council during a presentation at a recent council meeting.

Harries was looking for in-kind and financial support in the amount of $6,000 over the next three years for a project aimed at tackling the issue. She said the group is looking for $3,000 from the township for year one, two-thirds of that in year two and one-third in the last year.

The association, Harries said, is budgeting an expense of $32,666 for each of the three years. This funding, she explained, is made up of support from Tiny Township and other community partners, such as Ducks Unlimited Canada. She said she will be applying for a federal grant seeking $22,166 annually for the three-year program.

"We've identified a federal fund we feel we have a good chance of getting a grant from to cover a three-year project," she said, talking about the EcoAction Community Funding Program.

Step one of the project will be to map the spread in the Tiny Marsh, Harries said.

"At present, an educated guess is that we have approximately 140 hectares of invasive phrag and the marsh could be plugged within eight years," she added.

In some Southern Ontario wetlands, Harries said, the invasive plant grows in dense fields leaving nowhere for waterfowls to nest and trapping any turtles that wander into the stand.

She said MTM started forming a plan of attack last year in collaboration with the Severn Sound Environmental Association and the Invasive Phragmites Control Centre.

"The time to evaluate the problem is when the ice is in and you can walk out there and look at the phrag," said Harries. "Our first opportunity was in early February."

For that visit, she said, the group invited Janice Gilbert, executive director, Invasive Phragmites Control Centre, to visit the location.

"She's pioneered the use of truxors, amphibious vehicles in cutting the phrag out where it's growing in water," said Harries. "They can do in three days what it could take a crew of people a whole season."

She said Gilbert is positive about the potential of an intensive three-day attack with herbicide and truxors this August. Volunteers can then work before and after to take out the less dense patches of phragmites.

Harries explained to MidlandToday that the herbicide Gilbert is proposing is a form of glyphosate.

"We didn't want any herbicide sprays," said Harries. "But Janice said there's no other way of dealing with the phragmites when it's growing along the dyke. We've tried digging it out of the dyke structure, but it's too tough. The roots are totally entangled."

This, she said, is like having to choose between the evil of the phragmites and the evil of herbicide.

"They do it very carefully with backpack sprayers and it's spot application, which looks at exactly the spot you're targeting," said Harries. "We would need to get a permit from the provincial government to use that. There's certainly a lot of concern among ourselves because we're very conscious of the need to be carefully of the amphibians in the area."

After listening to the proposal, council was immediately on board with the idea, provided they could find some money, having recently approved their budget.

Tim Leitch, director of public works, said there was money in his department for just such a project.

"We do have money we just set aside for phrag control in the township and my recommendation would be to utilize that amount for this," he said. "I think this is a great opportunity for us to get involved with."

Coun. Cindy Hastings asked if MTM would be able to cover the remaining 50% with another grant and what percentage of the 50% could be covered by in-kind contributions?

"As far as I know, there's no limit," said Harries. "But when we get somebody like the Invasive Phragmites Control Centre in with the truxors, they are providing some in-kind services, but they need to be paid in cash."

Since the grant application had to be submitted by March 3, council ratified its decision at its regular council meeting. The motion stated that Council would supports the phragmite removal project by providing a letter of support and $3,000 in cash for 2021 and offer additional support either through the Mayor's Charity Golf Tournament or through an in-kind donation.