Environmental Resource Recovery Centre (ERRC) project was first proposed by the County of Simcoe in 2010
Jun 23, 2021 4:23 PM By: Jessica Owen 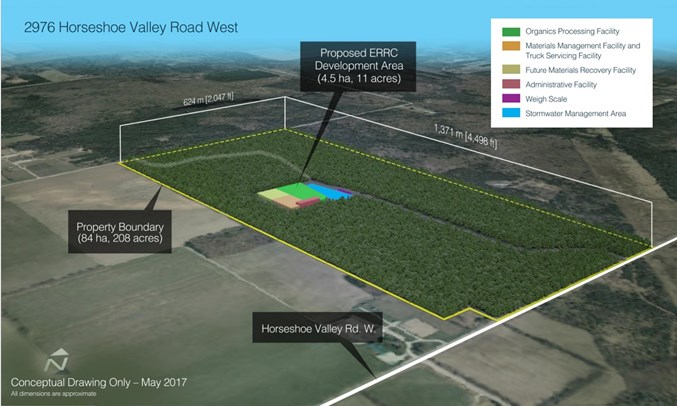 A rendering of the proposed ERRC on Horseshoe Valley Road. This is a rendering only and the design is subject to change. Contributed image

A big chunk of change – nearly $2 million – which was intended to be used to help fund the building of the Environmental Resource Recovery Centre (ERRC) in Springwater Township, has now been rescinded by the province because of delays in the construction process.

According to a report received on Tuesday morning by County of Simcoe councillors, grant funding approved in 2014 through the province’s Continuous Improvement Fund (CIF) for $2.2 million was contingent on construction starting on the controversial project by November 2020. The facility had to be operational by the end of 2023.

“This lengthy delay was caused by a judicial challenge that had been made by one of the appellants to an interim decision of the LPAT (Local Appeal and Planning Tribunal),” wrote Jen Slykhuis, special projects supervisor with the county, in her report to council.

“As a result, the county was not able to meet its obligations... and would not be able to have the project completed and operational by the end of 2023,” she noted.

The Environmental Resource Recovery Centre (ERRC) project was first proposed by the County of Simcoe in 2010 and is one of the key ways the county plans to deal with its own waste locally and cut down the cost of exporting.

The centre, once built, would include a facility to consolidate and transfer recyclable materials to other locations. It would also include an organics processing facility to convert organics into compost, fertilizer, and/or fuel.

The project is currently stalled while it is going through the LPAT process. Three appellants are objecting to the proposed location of the facility at 2976 Horseshoe Valley Road West in Springwater, in the middle of the Freele Tract of the Simcoe County Forest. The next tentative LPAT date is in September 2021.

In order to continue to be eligible for the CIF funding, engineering and site preparation had to start by December 2020, with an extension given in November 2020 to April 30, 2021.

According to the report, the county was notified on May 18 that the CIF funding was terminated. The county was able to keep $222,678 of the funding for completing earlier project milestones.

“The lengthy delays caused by successive adjournments in dealing with the township and county official plan amendments and township zoning bylaw, and the judicial review filed by one of the appellants with respect to the interim decision of the LPAT has resulted in the county losing $1,965,162 in grants for this necessary infrastructure,” wrote Slykhuis.

“It is noted that this funding loss will increase the payback period for the facility.”