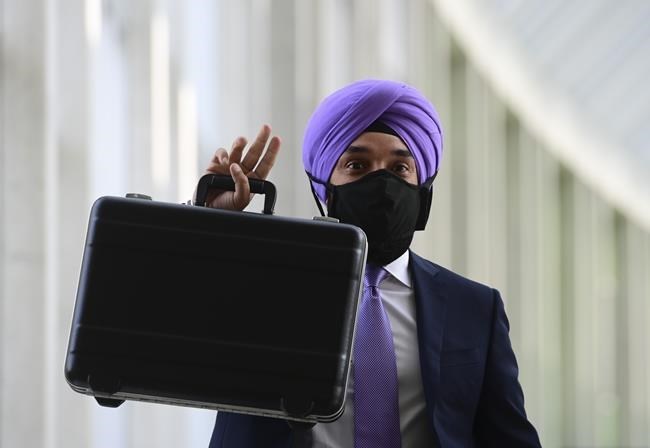 OTTAWA — Innovation Minister Navdeep Bains is seeking to pump enthusiasm back into the government's "supercluster" program following a report from the parliamentary spending watchdog that says the effort is falling short on its promise.

He says projects funded through the five supercluster sectors, which include artificial intelligence, manufacturing and agriculture, have generated 6,100 jobs across more than 220 projects.

But Bains is also stressing the program's potential over a five-to-10-year timeline following a performance that has failed to to live up to expectations so far.

The parliamentary budget officer projected earlier this month that only about 4,000 jobs would be created by the $918-million endeavour, which he said is unlikely to meet the program's spending and job growth goals.

The watchdog's concerns come on top of criticism from the Council of Canadian Innovators, which argues the superclusters fail to retain intellectual property developed through public funding.

This report by The Canadian Press was first published Oct. 28, 2020.

WORLD: Canada might not compete at international figure skating championships - if they happen
Nov 27, 2020 10:20 AM

CANADA: Ice-dancers Moir and Virtue among 114 Order of Canada inductees
Nov 27, 2020 10:13 AM
Comments
We welcome your feedback and encourage you to share your thoughts. We ask that you be respectful of others and their points of view, refrain from personal attacks and stay on topic. To learn about our commenting policies and how we moderate, please read our Community Guidelines.