OSHAWA, Ont. — A young Black man who was assaulted by an off-duty Toronto police officer more than three years ago said the incident permanently changed his life and the way he views police. Dafonte Miller laid out the lingering impact of the Dec.
Sep 25, 2020 3:14 PM By: Canadian Press 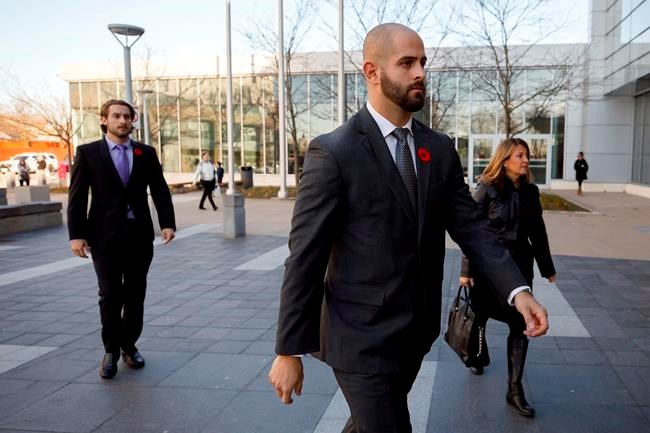 OSHAWA, Ont. — A young Black man who was assaulted by an off-duty Toronto police officer more than three years ago said the incident permanently changed his life and the way he views police.

Dafonte Miller laid out the lingering impact of the Dec. 28, 2016 encounter in a statement read by prosecutors Friday at a sentencing hearing for Const. Michael Theriault.

In it, Miller said that as a Black man, he had long heard stories about police abusing their power, but had never experienced it like he did that night.

"To this day, I can't believe that these would be the actions of a police officer. Someone that is sworn to serve and protect was viciously attacking me without any justification for doing so," he wrote in the statement.

"No one questioned him. Only I was worthy of suspicion ... Because of the colour of my skin, Michael Theriault could have got away with what he did to me."

Miller described feeling isolated and on edge since the incident, grappling with headaches and failing to find meaningful employment or return to school. He said the incident will forever be a part of his story.

Theriault's assault conviction was a first step in accountability, Miller said, adding he would like to see the constable serve jail time.

Several of Miller's relatives also submitted victim impact statements, while representatives of two organizations spoke about how the incident affected the community.

Miller's mother, Leisa Lewis, said the incident has placed a "heaviness" on the family.

"Everyone feels like they are walking on eggshells, not sure what to say to Dafonte, not sure how to help him heal," she said.

The sentence must send a message that "justice does not have special treatment for police officers," Lewis said.

Miller's sister, Lataijah Lewis, said Theriault's crime affected not only her family but the entire Black community, "who was forced to relive, once again, the reality that our lives are not valued; we are not treated as human beings deserving of respect and care by the law."

The Crown is seeking a jail sentence of 12 to 15 months and several other restrictions for Theriault, who was convicted of assault in June.

In written submissions, prosecutors stress the need for denunciation and deterrence, and list a number of aggravating factors, including that Miller was defenceless and clearly injured.

Defence lawyers, meanwhile, are asking for an absolute discharge or suspended sentence, arguing Theriault's penalty should not be used to address the broader issue of systemic racism.

"This is not a crime that is a racially motivated crime," defence lawyer Michael Lacy told the court. "Michael is not to be punished for the sins of the larger policing community."

In written submissions, the defence highlighted letters of support vouching for Theriault's good character as well as several mitigating factors, such as his "positive employment history" as a peace officer.

It also noted that he could face "collateral employment consequences, including termination" if sentenced to jail time. Theriault has been suspended with pay but would be suspended without pay if jailed. He also faces a disciplinary hearing with the force.

Theriault also addressed the court Friday, saying he has been publicly "vilified," called a racist and held up as an example of police brutality. "That is not who I am," he said.

The 28-year-old said he became a police officer to protect people and the community, and never intended to seriously hurt Miller.

"Both of our lives are forever changed but obviously the permanent injury to Mr. Miller will be far more devastating than anything else."

The sentencing decision is expected Nov. 5.

Theriault and his brother were charged with aggravated assault and obstruction of justice in connection with Whitby, Ont., incident.

Prosecutors alleged during trial that the Theriault brothers chased Miller, then 19, and beat him with a metal pipe, leaving him with a ruptured eye and other injuries.

The defence argued the pair wanted to arrest Miller after catching him and his friends breaking into the Theriault family truck.

They alleged Miller was the one armed with a pipe and the brothers were forced to defend themselves.

Ontario Superior Court Justice Joseph Di Luca said he couldn't rule out the possibility that self-defence played a role in the early portion of the encounter.

It was during that part of the incident that Miller sustained the eye injury that warranted the aggravated assault charge, Di Luca said.

However, the judge said the self-defence argument fell apart shortly afterwards when Theriault grabbed a roughly metre-long pipe and hit Miller in the head as the young man was trying to flee.

Theriault was thus acquitted of aggravated assault but convicted of the lesser charge of assault.

The officer was also found not guilty on the obstruction of justice charge, and his brother was cleared of all charges.

Theriault's lawyers had filed an application to vacate the verdict, arguing assault was not listed as an option on the indictment and should not have been available for a guilty verdict.

Di Luca dismissed the application, saying the defence's bid was not based on fresh evidence or a change in law, but rather on a new legal argument not raised during closing arguments. He noted that the argument that he made an error in law is one that should be left to the Appeal Court.

The Crown is also challenging the verdict, arguing Di Luca "erred in his analysis and assessment of the defence of self-defence."

The case has spurred protests against anti-Black racism and police discrimination.

This report by The Canadian Press was first published on Sept. 25, 2020.

B.C. casino didn't always fulfil reporting rules for cash buy-ins, inquiry hears
Oct 30, 2020 8:27 PM
The latest numbers on COVID-19 in Canada for Friday Oct. 30, 2020
Oct 30, 2020 6:57 PM
Comments
We welcome your feedback and encourage you to share your thoughts. We ask that you be respectful of others and their points of view, refrain from personal attacks and stay on topic. To learn about our commenting policies and how we moderate, please read our Community Guidelines.