‘Two cleanings per day is not safe enough for our children,’ says parent on school bus cleaning
Sep 24, 2020 12:24 PM By: Jessica Owen 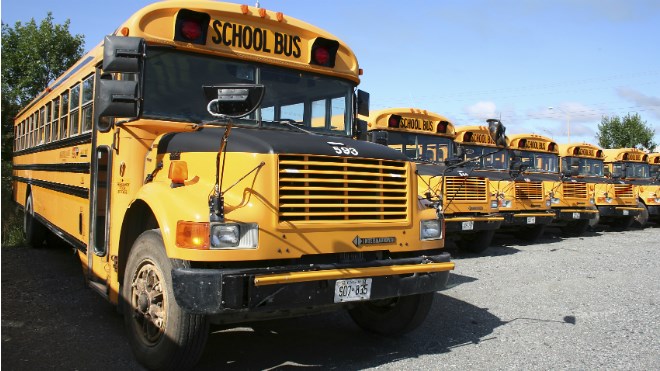 Area parents are raising alarm bells over cleaning and safety protocols on school buses and what they see as mixed messaging from the province.

Innisfil resident Leslie Pollak says he first became concerned last month when he started reading the back-to-school protocols for buses when they were released by the Simcoe County Student Transportation Consortium (SCSTC).

However, most buses serve multiple schools. For example, one bus would have both morning and afternoon routes that would include two elementary schools and one high school. These routes include schools from both the public and Catholic boards.

“I was, and still am, extremely concerned that two cleanings per day is not safe enough for our children,” Pollak told MidlandToday.

One of Pollak’s daughters attends a Barrie high school.

However, Pollak thinks some of his comments sent a mixed message.

“I want those buses cleaned constantly between routes,” Lecce said at the time in a response to a question about school board transportation. “These buses... they may deal with multiple schools, so I want to make sure we’re maintaining the effectiveness of our whole contact management system.”

According to provincial guidelines, they have enhanced funding to support increased disinfection protocols for frequently touched surfaces — for example, handrails and seat backs — to “at least twice daily.”

Lecce has repeatedly said in other media interviews that buses were being cleaned between routes.

While the province has provided funding to school boards for the new protocols, Pollak contacted Khanjin looking for assurance that the province would also be taking a role in making sure health measures are being followed and that the funding was enough, beyond just writing a cheque. The emails were also copied to Lecce.

Their correspondence was shared with MidlandToday.

“My clear question to both of you is, what are you going to do to ensure that all buses are sanitized between each route?” Pollak asked in his emails.

In all three of Khanjin’s responses to Pollak, the MPP indicates that the province has provided extra funding to boards to address these concerns, but does not indicate if the province will be doing anything beyond sending money to make sure protocols are being followed.

“It is the school boards across our community and the province that we entrust to ensure that these safety standards are met,” Khanjin wrote in her last email to Pollak.

For Pollak, though, the response was not enough.

“For me, three strikes and you’re out. I was prepared for her inability to answer a simple question, and in each of her replies she failed to answer and deflected,” said Pollak.

When reached for comment by BarrieToday this week, Khanjin said it’s not up to the province to enforce that their guidelines are being followed on buses.

“In terms of direction, school boards and transportation consortia, they’re the ones responsible for establishing contracts with school-bus operators to deliver the actual service. So it would really be up to them under the Employment Standards Act,” Khanjin said.

If drivers are concerned with the way their consortium or operator is dealing with safety, Khanjin said the province does have methods by which drivers can let the province know.

“The provincial government oversees the Employment Standards Act and the Occupational Health and Safety Act, which are enforced. So, for instance, if a school-bus driver feels unsafe, they can certainly use that,” she said.

Pollak hopes additional measures will be taken on school buses to ensure the safety of both students and drivers.

“Buses should be cleaned between each route, especially since they serve more than one school, from different boards, and from both elementary and secondary schools,” he said. “(They) should have an additional employee, acting as a greeter and monitor, as well as to clean the buses between each route.”

John Barbato, chief executive officer with the SCSTC, did not return a request for comment by publication time.

No local COVID-19 cases amongst 26 reported by health unit today
Oct 29, 2020 1:37 PM
Comments
We welcome your feedback and encourage you to share your thoughts. We ask that you be respectful of others and their points of view, refrain from personal attacks and stay on topic. To learn about our commenting policies and how we moderate, please read our Community Guidelines.